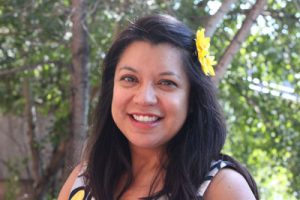 Angela (Angie) C. Trudell Vasquez , Milwaukee, is a poet, writer, performer, activist and publisher. Her words, poetry, essays and op-eds, have appeared in print and on stage, nationally and internationally. She was a Ruth Lilly Fellowship Finalist in 1995. In 2003, she was a featured poet and performer at Bumbershoot, Seattle’s annual music and art festival held over Labor Day weekend. From 2009 to 2011 she was the featured poet for the Latina Monologues in Milwaukee, Wisconsin. She has written and self-published two books of poetry, The Force Your Face Carries and Love in War Time, through Art Night Books, her own label, www.artnightbooks.com. Her poems have appeared in Echolocations: Poets Map Madison, Turn Up the Volume: Poems About the States of Wisconsin, Verse Wisconsin, Burdock, The New Verse News, Real Change, Raven Chronicles, Little Eagle’s RE/VERSE, I Didn’t Know There Were Latinos in Wisconsin and Local Ground(s) – Midwest Poetics. She received a Voices Award from Planned Parenthood for poetry she performed at their January 2013 Roe v. Wade. celebration event in Madison, Wisconsin. In 2014: she appeared at Fighting Bob Fest as a poet and activist, was nominated for a Pushcart award for her essay, The Making of the Latina Monologues, and won 3rd place for her poem Milwaukee #2 in the Raise Your Voices Awards through the Riverwest Arts Association. In 2014 through Art Night Books, she edited and published, Revolution & Reclamation, a collection of poems, short stories and micro tales knitting together the Midwest and Pacific Northwest, a collection highlighting love and social justice.