Issues » Voices of the Human Spirit » Section 1: Because we believe it is sacred

Section 1: Because we believe it is sacred

Nuns on the Bus are an inspiration for those looking for the progressive role of religious. They represent a modern version of the social gospel, stressing social justice and in their view what Jesus and the gospels stressed when he spoke of mission for those least of us or remembering how the meek shall inherit the earth.

Nuns on the bus began in 2012 protesting Republican initiated budget cuts affecting the poor. The cuts were championed by Rep. Paul Ryan justifying his actions by citing his Catholic faith. Led by Sister Simone Campbell, Nuns led a cavalcade around the country offering an alternative to religious social conservatism. Since then Nuns on the Bus have also championed the immigration justice and most recently the importance of voting and opposing voter suppression. 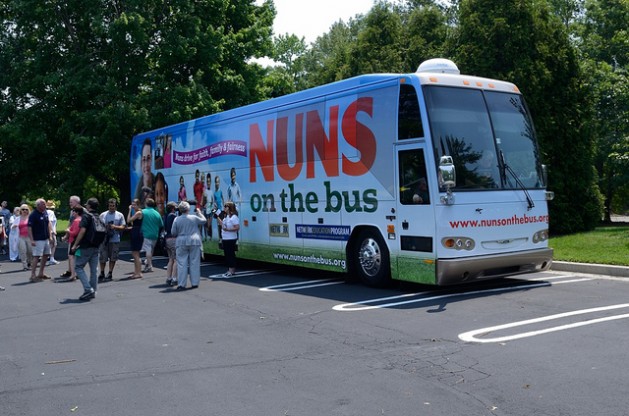 Dan McKanan in his book, Prophetic Encounters, Religion and the American Radical Tradition presents a history of religious reform and even revolutionary movements and the influence of religion on these progressive American initiatives. The social gospel was motivating sense for many involved in the advances of abolitionism, woman’s suffrage and later the broad activities of the Progressive movement.

The social gospel highlights the divisions among American religious. Many “traditional” religious commentators characterize the social gospel literally as the work of Satan and believe its message is corrupting and takes away from the focus on a better life not in this world. Social gospel adherents believe that much of the work is here on earth to create a better life.