Issues » A River Runs Through Us » Contents » Judith Roche

A RIVER RUNS THROUGH US 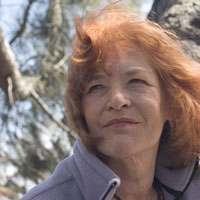 We are shaped by water. From the amniotic fluid we are formed in to the bodies of water we live by, we are spiritually and bodily nourished by water. William Butler Yeats says, “What’s water but generated soul?” In this inaugural  of About Place, we sought poems and stories about water, water creatures, and watery places, river, seas, creeks and lakes, people who make their living on water and people whose souls are stirred by a particular body of water.

In alchemical symbolic terms, water is the provenance of emotions, though there are many subtle variations on that, as fire is to passions, air is to intelligence, and earth is to manifestation, birth, and, well, earthiness or groundedness, again, many subtle variations. Living on the very edge of the continent, (Seattle) and spending much time on the waters on Puget Sound, the Pacific Ocean, lakes and river of the Northwest, as well as a childhood spent on the Great Lakes, water is my element. Salmon are my totem animal.

I have been pleased to be invited to edit this inaugural issue of About Place, an on-line journal, and am honored to present these poems, stories, and essays to you, the readers. They range from traditional writing to experimental, and evoke many bodies of water.

ABOUT PLACE JOURNAL is sponsored by Black Earth Institute a progressive think-tank dedicated to re-forging the links between art and spirit, earth and society.

Judith Roche is the author of three collections of poetry. They are “Myrrh/My Life as a Screamer,” “Ghost” and “Wisdom of the Body,” which won a 2007 American Book Award. She is also co-editor of “First Fish, First People: Salmon Tales of the North Pacific Rim,” which also won an American Book Award and has edited a number of poetry anthologies.Roche has worked in collaboration with visual artists on several public art projects which are installed in the Seattle area. Roche is Literary Arts Director Emeritus for the One Reel, an arts producing company, and teaches poetry workshops. Her work has appeared in Exquisite Corpse, Pebble Review, Wandering Hermit and several anthologies. She has conducted poetry workshops for adults and youth in prisons and is a fellow of Black Earth Institute. She was the 2007 Distinguished Writer at Seattle University.

Other works by Judith Roche »