I’m in a 6 a.m. Cloud 9 Shuttle in San Diego with blasting radio
and the host describing an early November fireball.
“I thought it was the Big One,” says another DJ.

“Imagine if it hit us” offers the driver.

It is the day before Typhoon Haiyan will hit the Philippines
leaving four million homeless,
and I’m thinking about declining red knot shorebirds
which sources note, in some areas “could disappear within five years”
due to global warming, which also brings northern migrating viruses,
and moose infested with ticks from British Columbia to Maine
being driven insane as they rub off fur on pines
then die from hypothermia.

The driver turns the radio down as we wind
through Point Loma hills in silence, which,
as any reflective person knows,
are never really silent.

The truth is
you can’t pull

a rabbit
from an empty hat

but you can
make people believe

we can have oil wells
and clean water,

CBS, ABC, NBC
and anything resembling


The Tale of Lucifer, an Old Man, and The University of Arizona and Vatican Telescopes on Mt. Graham 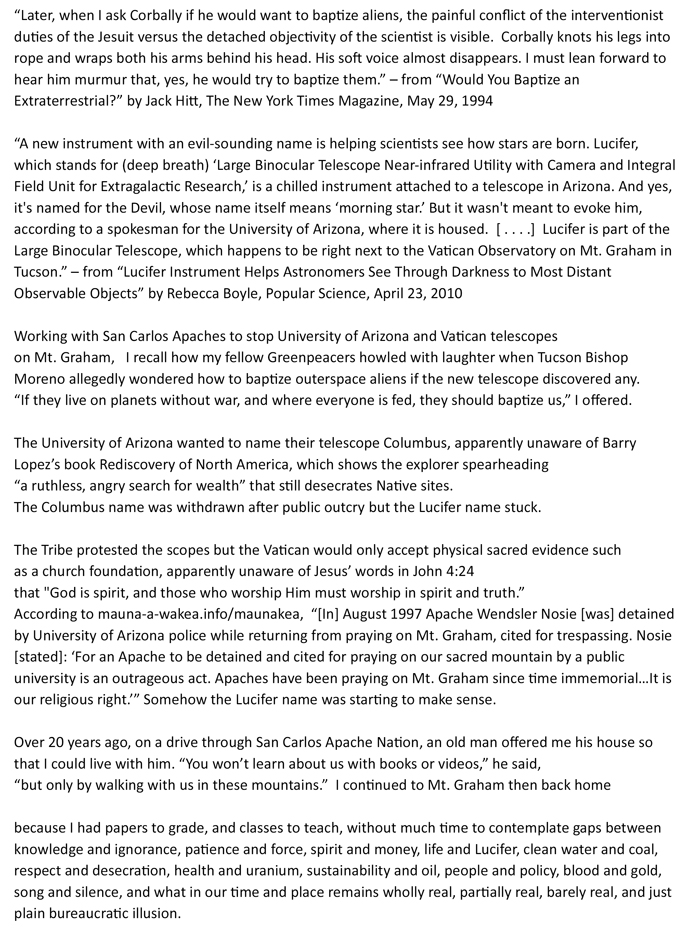 Scott T. Starbuck, a 2013 Artsmith Fellow on Orcas Island, feels destruction of Earth’s ecosystems is related to spiritual illness and widespread urban destruction of human consciousness. A former Oregon charter captain and commercial fisherman turned creative writing professor, his newest book The Other History . . ., published by FutureCycle Press and reviewed in the June 2014 issue of Amsterdam Quarterly, is at Amazon.com. His eco-poetry blog posts are at Miriam’s Well: Poetry, Land Art, and Beyond and at South 85 Literary Journal. His eco-poem “Thinking About AWP 2014 in Seattle” is at The Monarch Review. These items are linked on his blog at riverseek.blogspot.com