The Apples of Clare Island

Try to remember what you never knew. Lean into
cold wind, cold rain on the trail to the lighthouse.
Some longago granddad toiled in this green
sodden place; perhaps his sad dreams,
if he knew how to dream,
still float
in wet air.

Today these are your paths, empty, save the shade
of a tinker, his wagon, his horse. At the top of the hill,
gray above you, around you,
ashen sky, ashen sea,
but below you some color—
lazybed furrows striping
emerald downhill,

You come to a churchyard that grows lopsided gravestones
and small withered apples. Pick up a few windfalls to give
to the horse, then chat with the tinker,
buy needles and twine,
a square of blue flannel,
a soft beeswax candle
he’s traded for black potatoes,
and he tells you he can’t remember
when he started this journey,
does not know when he’ll rest,
and you turn away to follow
the windsong,

the blackthorn,
the hair-grass,
the rain. 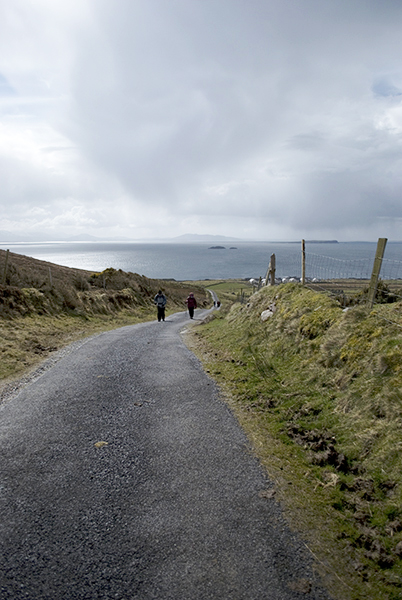 When she tells the story eons later, Persephone admits
she might have misremembered some of it,
forgotten some, made up some.
No matter, it’s her story and she’s sticking to it.

“Well, I was in The Below; you all know how that happened,” she says.
“I had already served a few dozen long winters with H. Not a mean man,
but distant. My husband, I suppose you could say, but never my beloved.
I was always hungry, thirsty, lonely, sad in that place of no season.
I had already committed the 3 or 4 or 7 pomegranate seeds’ offense
against the Moirae, the Fates, causing the days in The Above to shorten,
cold winds to blow, snow, the dead time, my crazed mother bereft,
weeping, wandering the earth, the whole 200 trillion frozen yards of it.
It was mid-October in The Above that most important day— tawny
and orange, soft autumn breezes, the occasional drizzle, late tomatoes
and berries, apples, and, of course, pomegranates. I couldn’t have known
nor could my mother Demeter have known that she was miles above me,
directly above me, as I came upon the pomegranate tree, one I’d never
seen before, next to some rivulet of Acheron or Lethe (I truly cannot
remember which river was which). And that was the beginning
of the new beginning.”

Knowing she should not, but could not help herself, Persephone leaned out,
reached, and one perfect globe dropped into the water, breaking open,
its creamy white channels glowing, red jewels glinting.
She stepped into the murky water, made a basket of her skirt
and gathered up that luscious red and white, sat on the bank’s cool rocks,
and ate every last juicy, sweet-sour, crunchy-seeded aril, juice runneling
up her arms, dripping on her tangled hair, staining her gray gown.
She did not know that, in The Above above The Above, taking
pity on sorrowful Demeter and on Persephone—yes, foolish, but
a good girl—the Moirae and Athena and Hera had put their goddess
heads together and decided that, if Persephone were tempted
yet again, and if she ate every aril, all 600-plus of them,
The Above would have a yearlong mid-October day.

Yes, she’d be away for one entire year but during that time
The Above would be the same as when she ate the fruit—
mild autumn days and nights, hardwoods turning yellow-gold,
the smell of sun-struck pears, apples at the edge of rot.
And then she could leave The Below. Forever.
And so it was. Neither knowing nor wondering why,
Demeter found herself content that long October—
gathering fruit, weaving, singing, sleeping, waiting.

Persephone says, “I recall nothing of my last year
in The Below—except thinking the arils tasted like garnets,
were garnets fruit, had garnets seeds and blood.”

She does remember turning away from H, never looking back,
and walking up the long and winding path to the earth and
the mother she loved. As she rounded the bend into slant
autumn light, the last maple to color turned its leaves
pomegranate red, garnet red,
promising the frost,
promising the green to follow.

Judy Brackett’s stories and poems have appeared or are forthcoming in Canary, Innisfree Poetry Journal, Prairie Schooner, Other Voices, Alaska Quarterly Review, Squaw Valley Review, The Fourth River, James Dickey Review, Wisconsin Review, The Waterhouse Review, THEODATE, Sierra Songs & Descants (Hip Pocket Press), and The Untidy Season: An Anthology of Nebraska Women Poets (Backwaters Press), as well as other publications. She is a member of the Squaw Valley Community of Writers, and she’s taught creative writing and English literature and composition at Sierra College. A native of Nebraska, she has lived in California’s northern Sierra Nevada foothills for many years.