TINA’S STORY OF DEATH AND SURVIVAL IN NICARAGUA

Florentina Pérez Calderon suffered a profound loss from the United States supported Contra invasions into Nicaragua in the 1980s. Her daughter Maria Zunilda and husband José Angel were killed in one particular onslaught. Each year since, on the anniversary of the attack, she commemorates their death with a journey through the area the Contras besieged.

We met Florentina, or Tina as she was familiarly called, in 1992, when my spouse Eileen and I traveled to Nicaragua as part of a commitment to human-rights work. With two U.S. friends who lived there, we journeyed to the northern region that bordered Honduras, a border transgressed repeatedly by invading Contras. At the time, Tina shared leadership in La Argatillo-Achuapa, one of the small base community cooperatives in the north that made up El Bloqué Intercomunitario Pro-Bienestar Cristiano, a popular liberation theological movement developed to help those in the north survive. 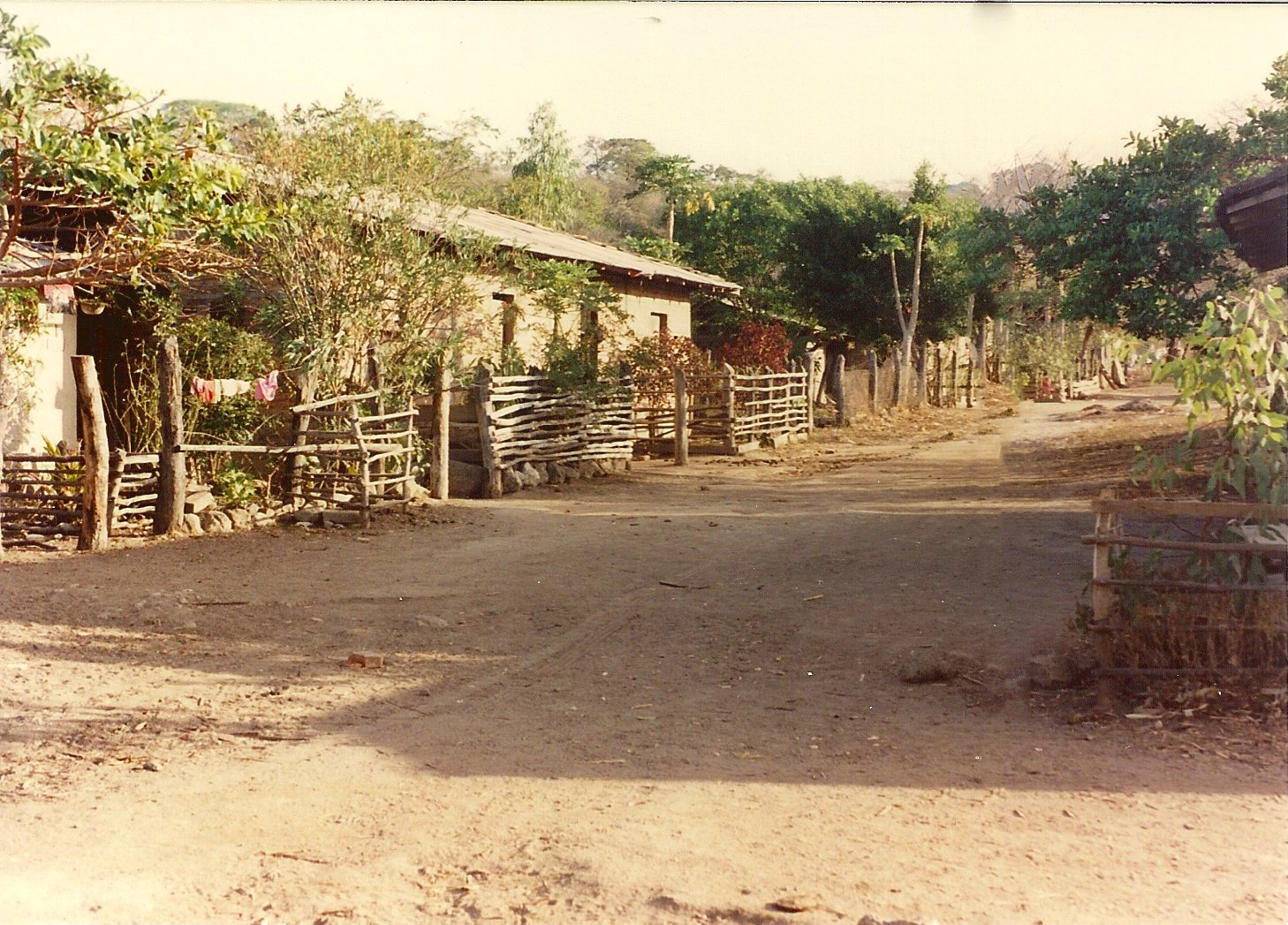 This was the period when the U.S. government under Ronald Reagan supported the Contras with money and arms to violently interfere with the Sandinista socialist government, one that was partly administered by two Nicaraguan Catholic priests who backed popular movements. By religious contrast, one U.S. Christian leader, Pat Robertson, pledged financial support to the Contras in person, speaking to a Contra group assembled in Honduras. Two years before our arrival in 1992, the Contra attacks climaxed in a U.S. brokered election that brought into power a government amenable to U.S. interests, led at that time by Violetta Chamorro, the elected president.

Tina related her story to us one morning as my spouse Eileen, friend Jenny Atlee-Loudon and I walked along a trail toward a river gorge mostly parched in the midst of a drought. Her people, generations ago, she said, had been driven off their land near León to the south by cotton and banana plantation interests and so were forced to eke out a living in the less fertile and often inhospitable hills to the north.

In the early hours of that particular morning, Tina had ground sugar cane stalks in a hand grinder and then on a hand stone mill for tortillas, mixed with their nearly depleted corn. Visitors and friends who worked with the Bloqué helped her, including Jenny and her husband Tom, formerly with Witness for Peace, in Nicaragua with their then 3-year-old daughter Carmen. They had quarters in the nearby village of Achuapa, living out what they considered to be an option of solidarity with the poor and helping to supplement scant resources through North American connections.

Tina had been preparing the stack of tortillas for community children who would be heading into the village for the next week, where the children shared a room so they could go to school in a newer building village men were fixing up. Her husband was slain at the former schoolhouse during the Contra attack, the old building burned down. A shrine to him hung on a wall in Tina’s small brick hut. Near it was another shrine for her daughter, who confronted this same Contra onslaught on the base community.

It is the story of her daughter Maria Zunilda’s heroism that Tina noted particularly during our walk. This is how she related it:

On the day of the attack that killed her, Maria Zunilda had brought the community’s thin cows to a hillock to feed on the parched land there. She carried with her a carbine rifle because of the ongoing threat posed by the Contras. While on the hill, she heard the community’s sentry yell “The Contras are invading!.” He would be overrun and killed. Maria Zunilda could see from her vantage that her community companions wouldn’t have time enough to completely flee. Tina, meantime, knew her daughter was on the hill and shouted a warning to her not to engage the Contras. “I’m going to fight,” her daughter shouted back.

Maria Zunilda ran down the hill and positioned herself between the fleeing community members and the oncoming Contras and began to fire her rifle at the invaders. Her action delayed the onslaught just enough to enable community members to escape. The attackers overran and killed her too..

Tina’s daughter and husband were slain in late 1984 — a little more than seven years had passed when we visited. The community still survived, obstinate but fragile at the time. “The martyrs, they keep the communities together,” a woman said a few days later, in another base community near the northern border town of Somotillo, also part of the Bloqué. “The martyrs’ spirits are real, alive” she said, “They sometimes reappear to give words of encouragement, to bring light. They are ancestors of hope.”

Along the trail Tina guided us during the walk, she pointed to a cascade of rocks that led to a narrow river. Fleeing cooperative members had rushed headlong over the rocks to escape the Contras, she said, taking this most difficult route to elude their pursuers. Another base community nearby, just further down to the left, she said, maybe a mile, had been totally wiped out. The Contras dropped one of its male organizers, still alive, from a helicopter onto a pile of bodies below. The attackers decapitated a woman leader in the same attack, her head rolled around like a soccer ball. “Just over there,” Tina said, “past that ridge of trees.”

As Tina and others noted, the martyrs bore fierce power. Their shrines combined the images and memories of the community’s dead, the emblems of the Sandinista political movement, emblems of the Christ of the Poor, and images of their popular movement practice. The martyrs also appeared, in this view, to open a kind of spiritual-material liberationist space. More than saints of a Christian past, they were tangible, controversial, canonized by an immediate popular struggle, members of families who became beloved ancestors, heroes of particular sites of resistance. The communities’ apparitions were connected to an indigenous spirituality, a Nicaraguan mestizo form that expressed itself partly through Christian practice but also had its own authenticity.

Tina said she herself had seen and been inspired by such visitations from her own kin. She reflected practically on all this during our walk.

“Base-community members are people,” she said, “with all the weaknesses and strengths people have. Some go on binges. Others slack off when work needs to be done. Still others are continually difficult to live with.”

With two loved ones killed, and with hopeful children needing a future, she vowed she would persist. For her, the practical and material side of spirituality was where the work goes on.

Tins’s commitment continues to this day. “She is doing well, still leads the long walk down the back of the mountain each year on the anniversary of the attack of the co-op when her husband, daughter and others were killed,“ wrote Jenny Atlee-Loudon recently, now working with another NGO, The Nicaragua-US Friendship Office. Tina’s community has a campesino project as well now, Jenny said, dedicated to ensure that its historical memory persists.

(Writer’s Note: Pat Robertson’s connection is verified in a Bill Moyer’s three-part series from that period, “The Kingdom and the Power,” one part which showed Robertson in Honduras, wearing a brown shirt and pants pledging to support the Contras with a million-dollar donation.)

Wes Rehberg is a long-time social justice activist, writer and journalist, retired pastor, and also produced video art works and documentaries. He has a Ph.D. in philosophy, interpretation and culture from Binghamton University in NY. He recently began fiction and poetry writing as well, publishing in these areas. He is married to Eileen Rehberg, a social policy analyst who has collaborated with him on several projects. They currently live in Chattanooga, TN. Their home page is www.wildclearing.com