Why hope? According to Tali Sharot, a professor of cognitive neuroscience, hope is speculative.[1] Hope is bound up with our ability to imagine a future, to time-travel to a faraway place and era, to visualize how our prospects will change for the better in the days and months ahead, even when something as terrifying as a pandemic is warping our routines and killing our communities. To hope is human.

An example: About Place Journal’s Practices of Hope issue opened for business on December 15, 2019, a few weeks before a mysterious pneumonia outbreak in China was first reported to the World Health Organization. That day, I woke at dawn in my tiny cottage in Moscow, Idaho (big skies and rolling wheat fields), grabbed a cup of coffee, opened my computer, and gave full attention to each story, essay, poem, video, artwork, performance, and hybrid work that popped into the submission system. That dawn meeting at my large copper table with the Practices of Hope submissions became a ritual. In the weeks and months that followed, as the novel coronavirus swept the globe and news of its spread seeped into almost all facets of our lives, the ritual turned into its own practice of hope. Every day, the other three editors and I read, viewed, commented on, and discussed the pieces entrusted to us. We often chose a line or image that slayed us or challenged us. Just as often we contemplated the larger meaning of a piece, how it reached beyond itself or surprised us. Each and every piece affected us individually and as a collective; each made us see our worlds a little differently. 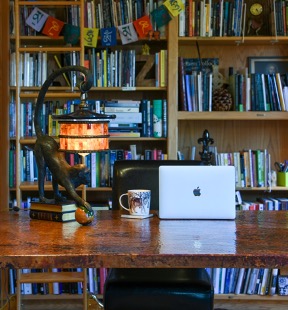 Though I knew submissions would come to an end and we eventually would have to choose some pieces over others—such are the constraints of curation—those early morning hours reading and discussing the artistic expressions of our times were my lifeline. They live inside me to this day and continue to pull me into a sphere of voices and images. Some are literal voices such as Misha Penton’s performance “A Thousand Rockets.” Others speak quietly through paragraph, sentence, and line, like Lisa C Krueger’s poem, “Fool’s Gold: To an Ill Daughter,” where mother and daughter walk a seashore “both of us bold with art.” Or Jay Hansford C. Vest’s “There are Jaguars Along that Border,” where two friends discuss the panthers on the southern US border, contemplating our entanglements with spirit and animal worlds. Such crosscurrents and multi-species encounters shine in some of the video pieces: Jillian McDonald’s “The Dark Season,” set in an arctic landscape that sparkles and shifts as humans, animals, shadows, and geologic forms (a moving rock), tells a fragmented narrative, while Vivian Demuth’s “The Radar at Stoney Point” is a lyrical dialogue between birds and scientists. Still other pieces, such as Jennifer Sinor’s essay “Memories of the Future,” insightfully consider the meaning of “the speculative” for our most personal stories.

The work that spoke most to me was reflective, work that travelled not forward but backward in time, that travelled inward to journey outward, as so many pieces do. Like James B. Wells’ “Resurrecting my Father and Me,” a chronicle of how he tried to recover lost memories of his WWII and Vietnam War veteran father’s death by getting in touch with his elementary school classmates fifty years later. As a reader, I’m especially drawn to memory as a mode of writing, so I worried about how such pieces would fit our theme. I often felt that the stories and images of the past communicated speculative thinking and practices of hope, though I couldn’t articulate why. Fortunately, Tali Sharot’s work on hope sheds some light. Her research has led her to believe that an essential function of memory may be to imagine the future. As so many of the pieces in this issue make abundantly clear, memory is flawed, inaccurate, fragmented. And for good reason, according to Sharot. Our neural networks responsible for memory may not be in the business of replaying an accurate past as much as they are in using the past to construct a potential scenario that will help us survive in the future.

This morning, April 1, 2020, as we send the finished Practices of Hope issue to Jesse Hughes and Michael McDermott, who will lay out the pages with loving care, I’m at my copper table again, coffee mug in hand and sun rising behind the distant foothills of the Northern Rockies outside my window. It occurs to me that the life of this issue, from submission to curation to publication, has not only developed along with the coronacrisis, but it also charts our future. In other words, the works in this issue are an antidote to the terror of the virus or the other tragedies and injustices we face. But more than that, they are a reminder that being human means being speculative. Being human means we can’t help but practice hope.

DJ Lee’s nonfiction essays have appeared in Narrative, Silk Road Review, Vela, Terrain, and elsewhere, and they have been finalists for contests and won awards. She is author/editor of eight books, both scholarly and creative, on literature, history, and the environment, including the oral history collection The Land Speaks (Oxford University Press 2017), and her hybrid memoir Remote: Finding Home in the Bitterroots (Oregon State University Press 2020). She is Regents Professor at Washington State University where she teaches literature and creative writing and co-directs the Visiting Writers Series. She is director of the Selway-Bitterroot Wilderness History Project and is currently a scholar-advisor at The Black Earth Institute.

Other works by DJ Lee »