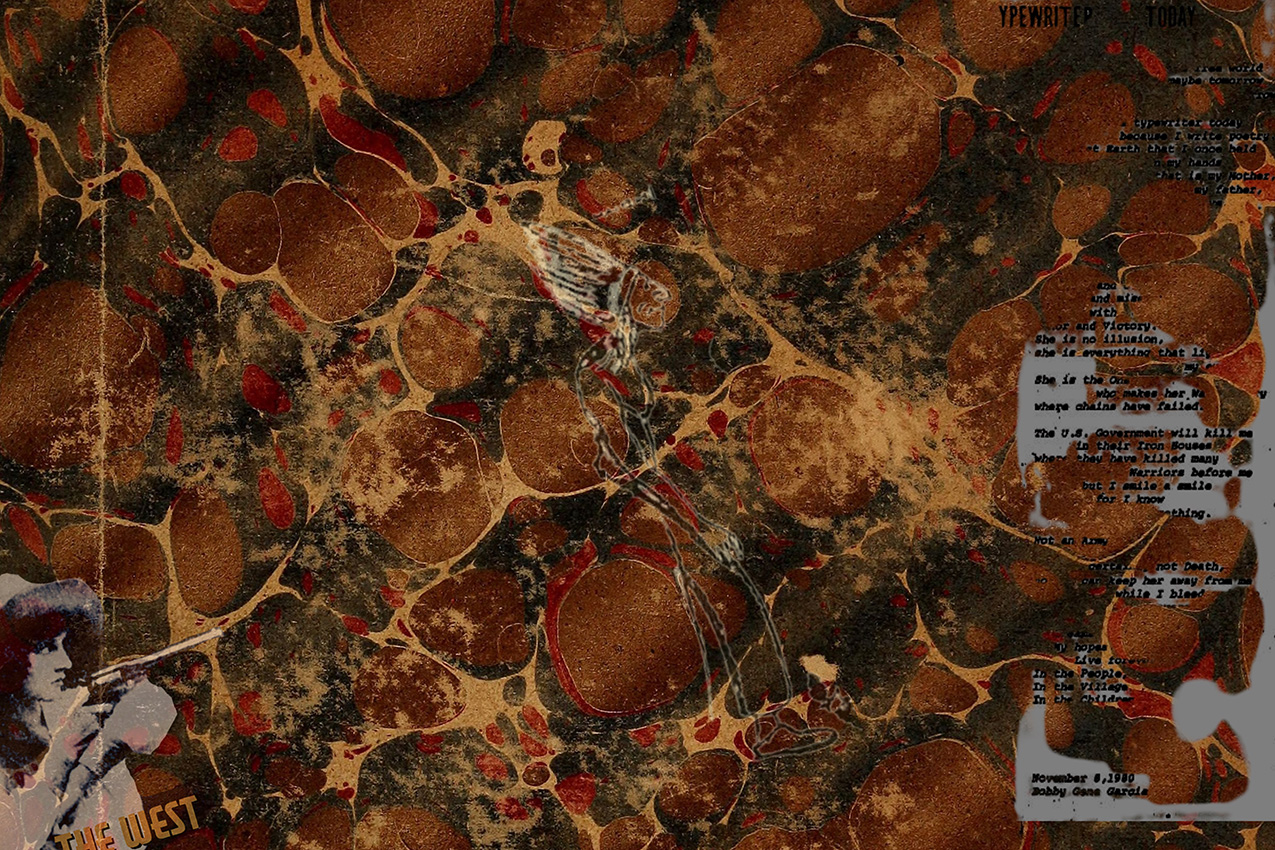 My uncle, Bobby Gene Garcia, was an American Indian Movement activist murdered in prison in 1981. He escaped alongside Leonard Peltier, who is still incarcerated and has recently attracted the attention of the Democratic National Convention. They were dear friends and had a double wedding on Valentine’s Day; later that year, Uncle Bobby was murdered.

This digital collage is part of a series that pays homage to Uncle Bobby’s poem, “They Took The Typewriter Today.” The background is an interposition of a cover of Irene Jerome Hood’s illustrated love letters; she was a Coloradan Victorian botany artist. In 2019, a Littleton resident proposed renaming the racist Redsk*n Mountain after Jerome, and the incorporation of her book cover is a reference to the obscuration of sacred land and the #LandBack movement at the hands of white women.

Layered over are a cinematic still of a white woman with a pistol, aiming at a second interposed image of a cartoonified chief from the New York Times, a statement on the detrimental Hollywood effect on the “cowboys and Indians” narrative that leads to overincarceration of indigenous men. My uncle’s poem stands out against the alluvial plains referenced in the pits and shadows of the landscape-reminiscent marbled paper, in recognition of the ties Chicanos have to the struggle for water rights in the Colorado River; this river is symbolic because like myself and my uncle, it was born in Colorado and stolen, dried, exploited, and desanctified. His poetry references these issues but remains published only in prison magazines, sometimes called kites. This piece references the insidious ways the carceral state hides behind false representations of equality and justice.

Typewriter #1 is forthcoming in the Museum of Americana. I am continuing the series in somber reflection as we await Leonard Peltier’s release.

Dr. Bunny McFadden is a Chicana mother who tinkers with words for a living. She is a creative activist, independent education & equity consultant, and language arts educator. Her dissertation focuses on decolonizing pedagogy through autoethnography.