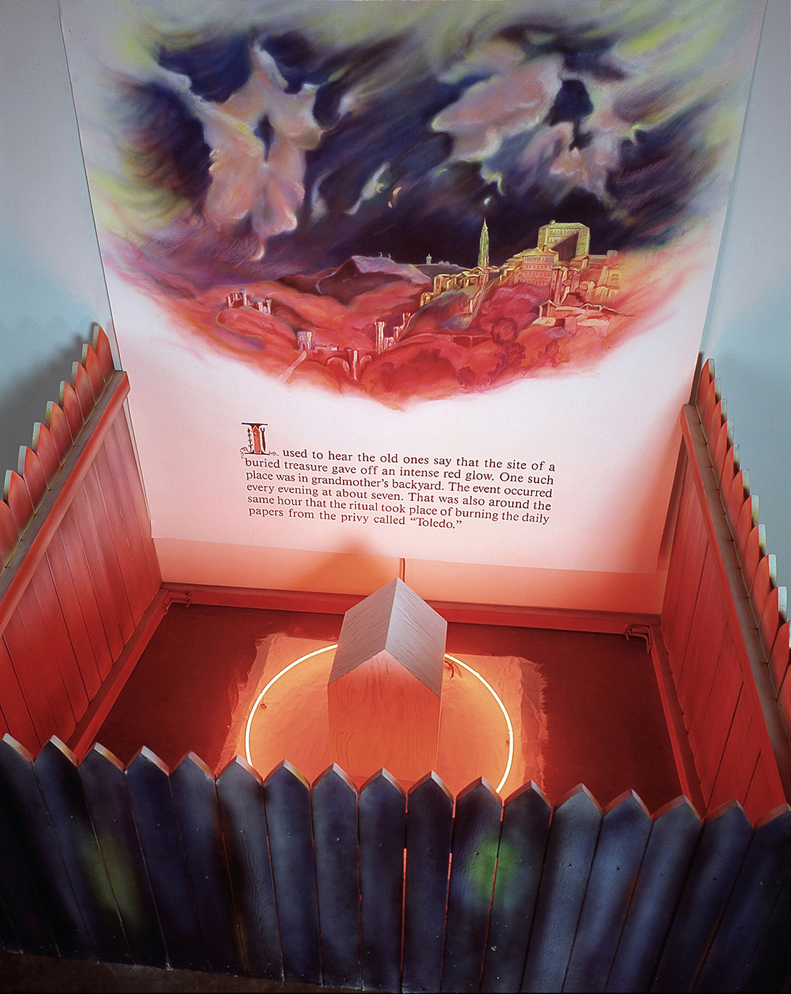 I used to hear the old ones say that the site of a buried treasure gave off an intense red glow. One such place was in grandmother’s backyard. The event occurred every evening at about seven. That was also around the same hour that the ritual took place of burning the daily papers from the privy called “Toledo.”

I used El Greco’s famous painting “A View of Toledo” to reference our Tex-Mex border lingo, and to illustrate the story. The title of my work is, “Tolido,” Spanglish for toilet, as in the use of the word “privy” which is in the story.

Domenikos Theotokopoulos was a transplant from Greece who went by the name “El Greco” when he moved to Spain. An immigrant, just like my grandmother, who told me the story in words. I enjoy layering my artworks conceptually, visually, verbally.

Celia Alvarez Muñoz is a conceptual multi-media Texas artist known for her diverse works including Artist’s Books, Photography, Installation, and Public Art. She is a recipient of two National Endowment for the Arts Fellowship Awards in Photography and New Genres; CAA Committee on Women in the Arts Recognition Award; Honors Award for Outstanding Achievement in the Arts by Women’s Caucus for Art; The Outstanding Centennial Alumnus by University of North Texas College of Arts and Sciences; and many others. Her work has been nationally and internationally exhibited, and included in the Whitney Museum of American Art 1991 Biennial. Her work is in numerous private and public special collections of major museums, universities and corporations.  The book Celia Alvarez Muñoz, by writer/poet Roberto Tejada is available via Amazon books.