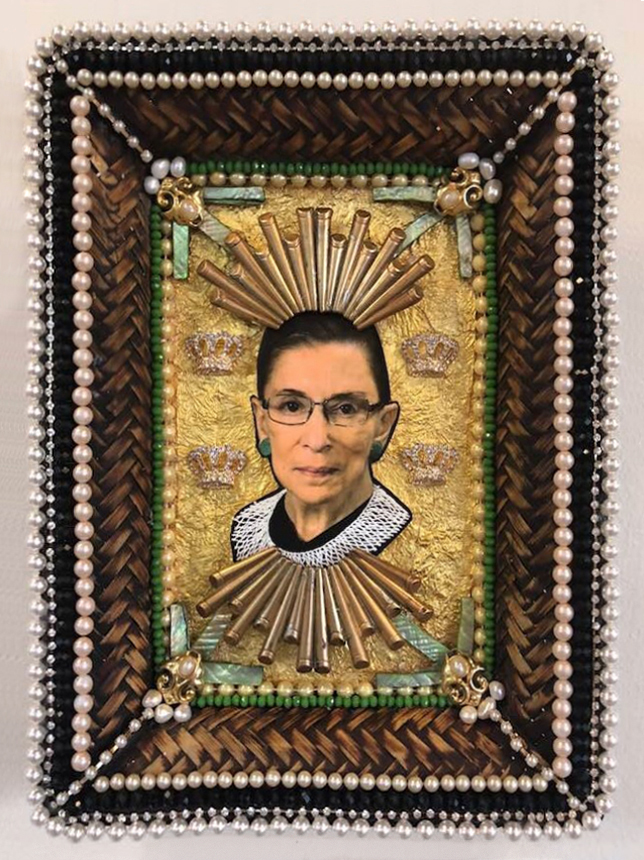 The only color photograph on my office wall is of four ebullient, smiling women. They are, from left, Sandra Day O’Connor, Sonia Sotomayor, Ruth Bader Ginsberg, and Elena Kagan. I call them the Four Amazements. My submission is a three-dimensional, literally iconic piece about the impish figure standing third from the left, titled, not surprisingly, “St. Notorious.” The “Notorious RBG” is a moniker Ruth Bader Ginsberg says her grandchildren love.

OK, full disclosure: The Notorious RBG reminds me a lot of my mother, and let’s try to get that out of the way. At 5′1″, she’s the same height and build, and she has a similar sharpness of features and an uncompromising directness to her gaze. I imagine the silent tapping of the justice’s manicured nails on the bench as she rolls around what’s being presented, the questions being asked, the statements being made, weighing and considering her own. I’m telling you: my brother and I remember those kinds of maternal interrogations vividly.

She was appointed to the U.S. Court of Appeals by President Jimmy Carter, and elevated to the U.S. Supreme Court in 1993 by President Bill Clinton, both presidents being venerated by my mother. She admired Justice Ginsberg for her consistent advocacy of women’s rights and gender equality, and on December 12, 2000, when the Supreme Court issued its decision in Bush v Gore, she joined Justice Ginsberg with her own sharply worded dissent from her hospice bed in my home. She would have ecstatically concurred with the justice’s opinion in Obergefell v Hodges 15 years later.

St. Notorious is in homage to the model of dignity Justice Ginsberg is and will always be. It also incorporates favored, repurposed pieces of jewelry that belonged to my mother, another anything-but-slight model of dignity and intelligent focus.

From early childhood, John Peck was fascinated with constructed three-dimensional works. In his teens he was introduced to Joseph Cornell and became hooked on the concept of abstract stories captured in three-dimensional objects. Peck’s friends Scotty Powell, a University of Arizona art professor, and Grace Sternberg made gifts to him of constructions and elegant Thorne boxes. Almost yearly as he traveled from his native Tucson to a family farm, he spent time at the Art Institute of Chicago savoring its collection of Cornell and the magnificent Thorne miniature rooms. Peck’s early work was based on working with found objects featuring abstract themes. That evolved to a more journalistic focus, in keeping with his job and his family of generational journal-keepers.