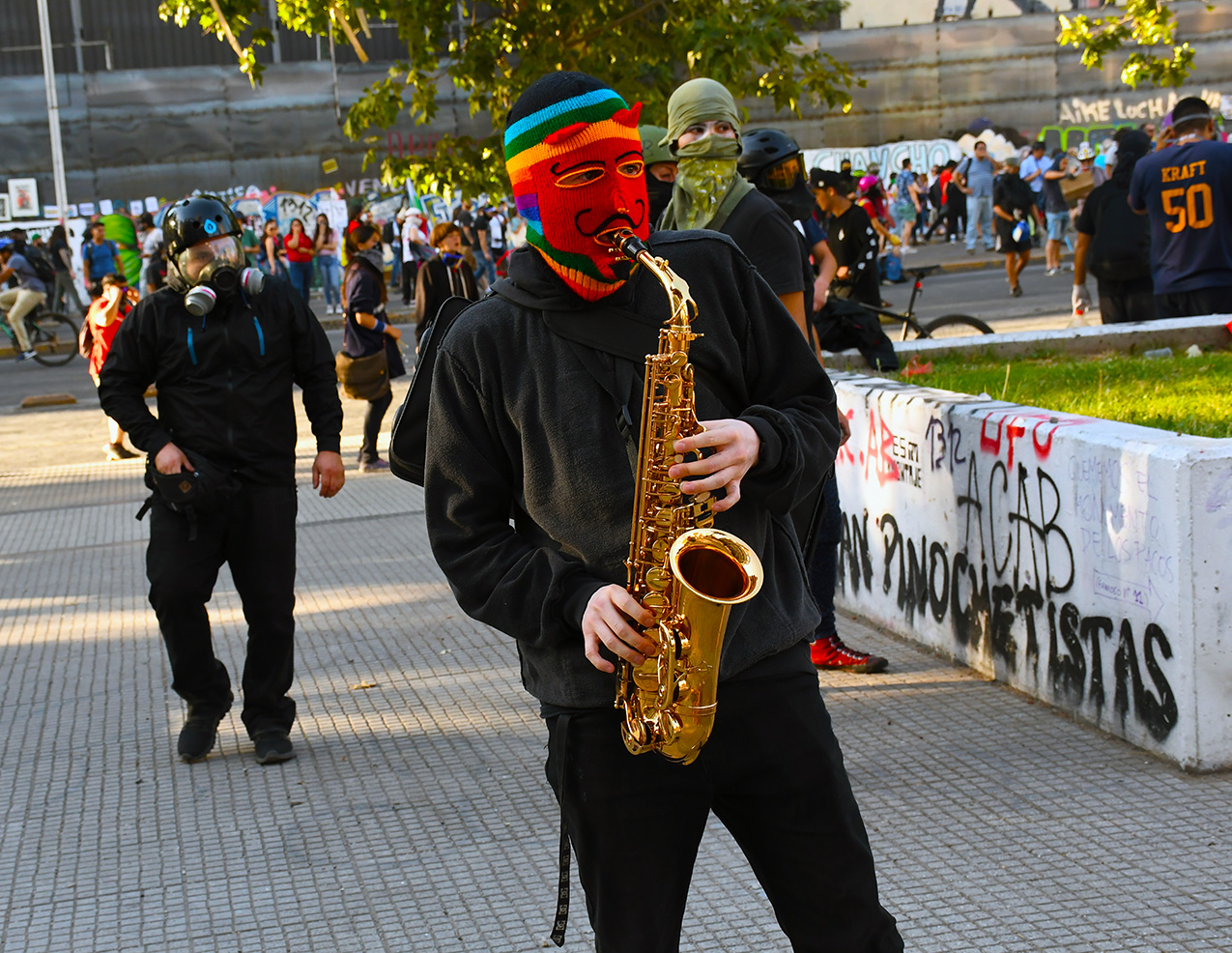 Protester playing the saxophone heads for the frontlines in Santiago. 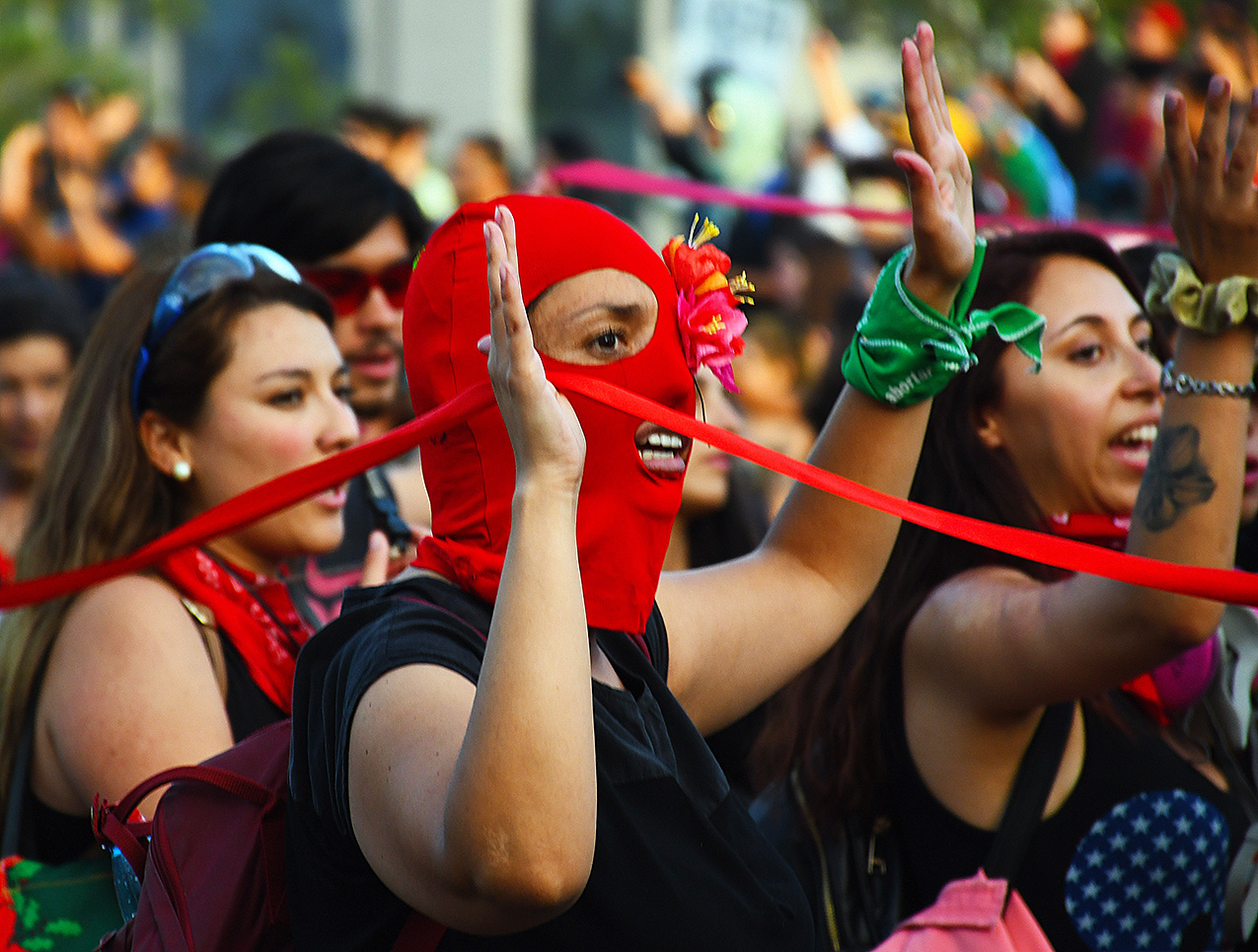 Women have a leading role in the protests, including the Red Masks in Resistance movement. The women’s collective Las Tesis wrote a song called “Rapist in Your Path” about the sexual attacks against women by the police. The song is now sung at women’s marches and protests around the world. 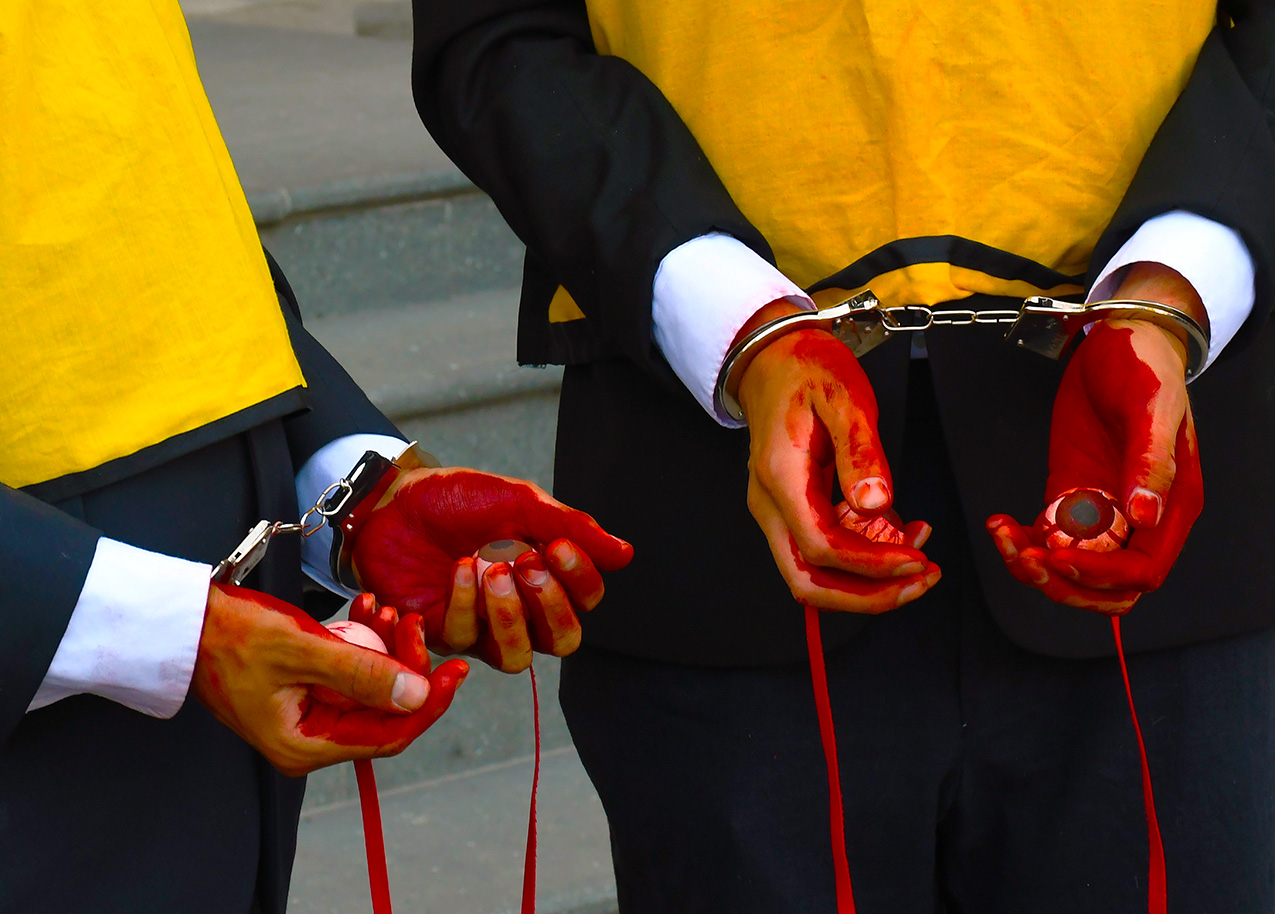 Guerrilla theater depicting blood and eyeballs in the hands of the government. The event occurred on International Human Rights Day, 10 December 2019, to commemorate the (then) 350+ eyes injured, some permanently, by the Carabiñeros de Chile (national police) who intentionally shot protesters in the face with shotguns filled with rubber-coated metal pellets. 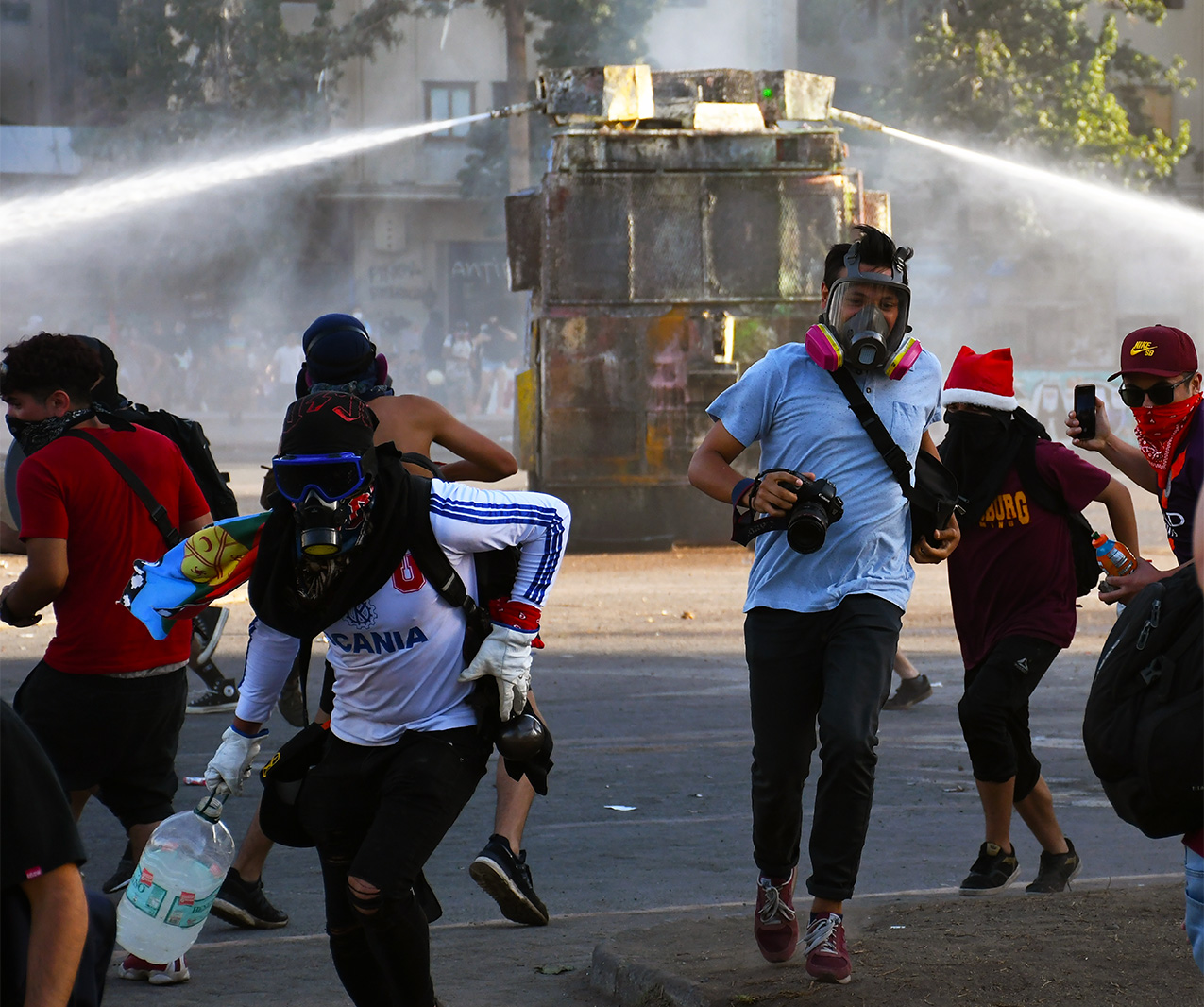 Water cannons chase crowd. A caustic liquid was mixed with the water to irritate the skin and lungs. Water cannons were strategically used to target street medics and the Red Cross. 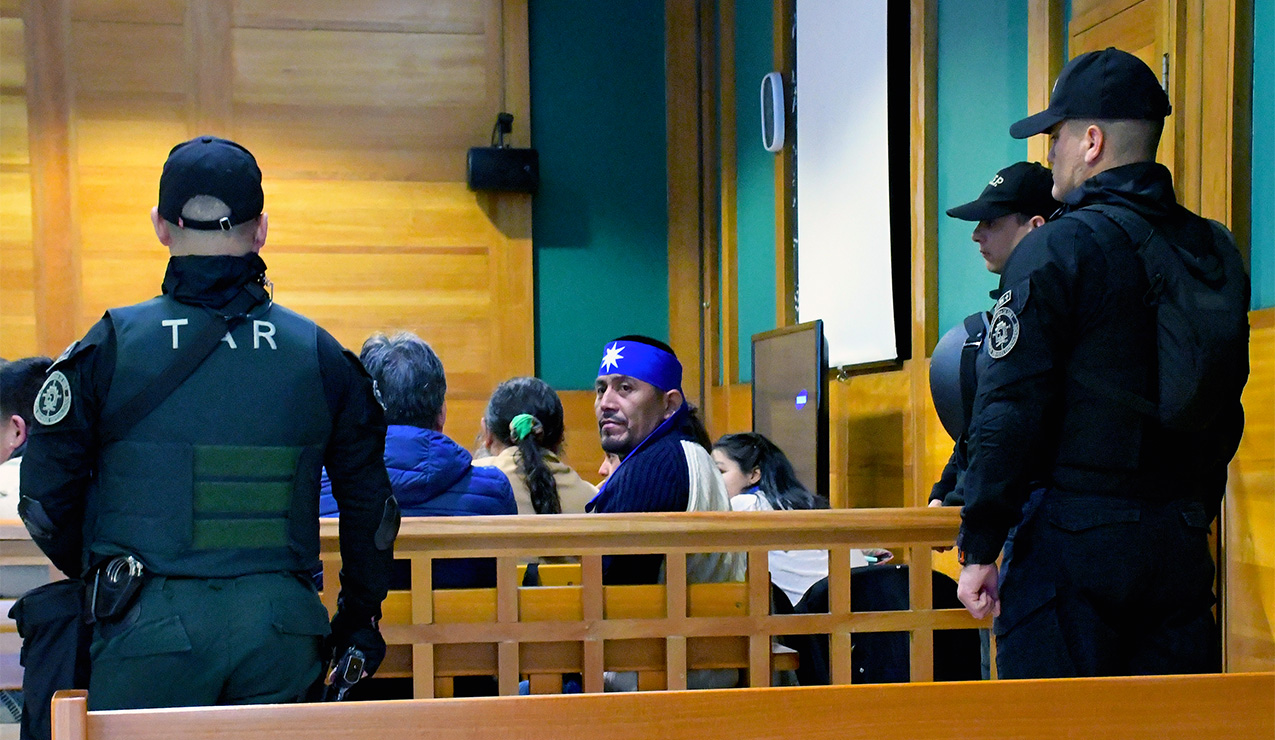 Mapuche Lonko (leader) and 2019 Goldman Environmental Prize winner Alberto Curamil (center), during his 2019 trial in Temuco, Chile. He was arrested on trumped up charges in April 2018. His arrest and the year and a half he spent in jail awaiting trial are understood to have been retribution for leading a campaign that stopped two hydroelectric projects on the Rio Cautín. The River is sacred to the Mapuche, and its headwaters start in the snowfields of the Lonquimay volcano which rises up over Mapuche lands.

On 13 December 2019, The Court of Temuco acquitted Lonko Curamíl of all charges, allowing him to walk out a free man. 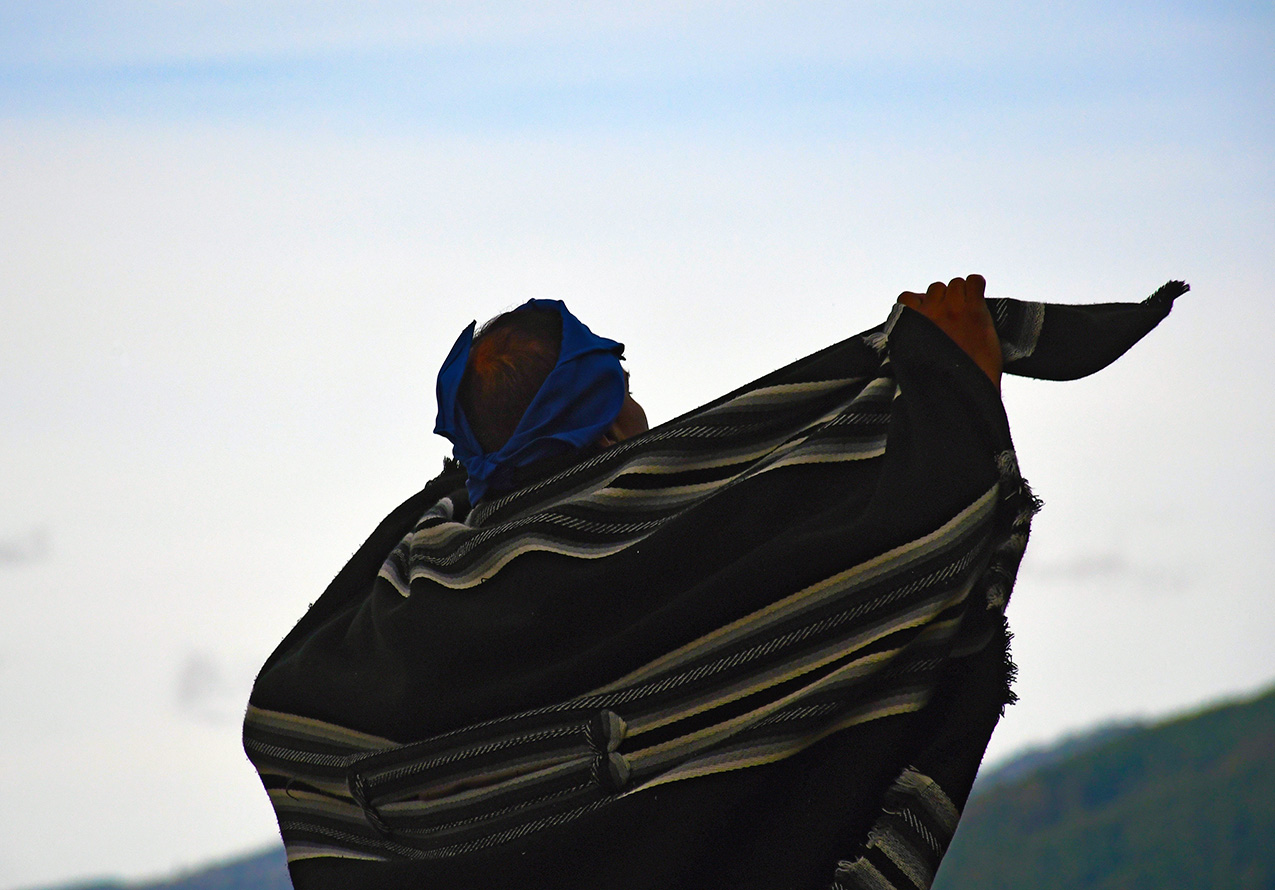 Mapuche ceremony in Liempi Colipi. We were allowed to photograph and film this sacred ceremony. One day later, on U.S. “Thanksgiving” Day (known now as the National Day of Mourning), Indigenous Mapuche in Liempi Colipi, occupying their stolen ancestral lands, were attacked by Carabiñeros who fired shotguns and tear gas, injuring several people at the blockade.

In 1973, the US helped bring the notorious and bloody dictator Augusto Pinochet to Chile with the overthrow of the democratically elected president Salvador Allende. The violent regime ushered in a neoliberal experiment where all public services in the country were privatized and vast expanses of land were stolen from Mapuche people and others and handed to rich elites and large corporations.

In late October of 2019, a small increase in subway fares triggered a mass revolt of the Chilean and Mapuche People against the neoliberal system that never went away even when democracy was re-established in Chile. The neoliberal economic model has kept many living on the edge, and has driven many Mapuche communities into desperate poverty. But the mass uprising does not seek reform of this unjust system. While the target for now is to replace the Constitution left over from Pinochet, that is only the beginning, the first step toward a new future for the peoples of Chile.

I was there with a team to document the uprising for 3 weeks in late November and early December 2019. A statement frequently heard during our stay in Chile was, “This is where neoliberalism was born and this is where it will die.”

During the uprising, thousands of people were detained, with more than thirty killed. More than 400 people suffered serious injuries to their eyes, due to Carabiñeros (Chilean National Police) firing shotguns filled with rubber coated metal pellets into protester faces. I witnessed many cases of the Carabiñeros using excessive violence. Besides the targeting of eyes, there were sexual attacks on women prisoners, and excessive use of teargas and water cannons spiked with a caustic substance targeting especially street medics helping the injured. On one of my last days there, Human Rights Day, I watched police water cannons target the Red Cross tent in Plaza de la Dignidad.

In the streets around the Plaza was mixture of tear gas and marijuana smoke. Defiance was seen everywhere. Streets were clogged with masked protesters. In green spaces people rested, played music, sang and danced. On Friday afternoons, thousands of protesters walked or marched to the Plaza de la Dignidad in the center of Santiago. The gatherings often progressed into what felt like a fiesta accompanied by street fighting on the side–where militancy, music and art met and complemented each other.

The uprising was not about electing a new president or political party. It was about diving deep into the economic and political roots of the economic, social and ecological crises in Chile, challenging and denouncing false solutions, and joining together across barriers to make real systemic change. While the mass-protests have ended, the movement is just getting started. Despite the COVID quarantines, it continues its work to create a people’s way forward that encompasses the rights of Indigenous Peoples, an end to free-market ravaging of the environment and a just economic and political pathway forward.

Orin Langelle is Co-Founder of Global Justice Ecology Project, and Director of Langelle Photography. Langelle earned a B.A. in media and communications, and trained as a photojournalist at Manhattan’s International Center of Photography under Cornell Capa, co-founder of Magnum Photo Agency and brother to renowned war photographer Robert Capa. Langelle has both documented and led campaigns for social and ecological justice for five decades, starting with the movement against the Vietnam War. This also includes defense of forests and support for indigenous autonomy; resistance to corporate globalization, including the World Trade Organization, World Water Forum, G-8, and World Social Forum; and United Nations climate conferences and protests on six continents. Langelle’s photographs have appeared in innumerable print and online publications including USA Today, Z Magazine, Time Magazine, The Progressive, Christian Science Monitor, Earth Island Journal, Seedling, Toward Freedom, plus several books. Numerous exhibits of his photos have taken place from Buffalo, NY to Amsterdam to Bali, Indonesia.

Other works by Orin Langelle »