Feeding Community on the Pacific Slope

In 2016, I spent three months in Costa Rica on a David Bird Fellowship from the Conway School of Landscape Design. Most of my time was spent in a region near the country’s newest National Park: La Cangreja. Many in the area are committed to sustain the local community by reliance on a homegrown network of individuals and businesses. Small hospitality organizations, like Rancho Mastatal, and a local business group, called eco-emprendadores, purchase goods from local purveyors and support trade with small-scale resellers to ensure capital is cycled through the local economy. Only twenty-five years ago electricity arrived in Mastatal. Now ubiquitous cell phone and social media awareness has infiltrated every family. While the rate of change with technology may increase, the ability and direction to stay connected to the local land and food production is possible. Sustainable agriculture has the potential to provide a stable and equitable means to support communities. The “Pura Vida” found in Costa Rica, with a high happiness index and longer life expectancy than the U.S., was achieved with expanded education and healthcare services funded by the abolition of the military. The country is not, however, without challenges posed by poverty, discrimination, soil degradation, pollution, biodiversity loss, deforestation, and climate change. Yet, high on the Pacific slope, on an ancient volcano, rainforests with endemic species and terrain devoted to agriculture support human settlements with livelihoods, love, and community. 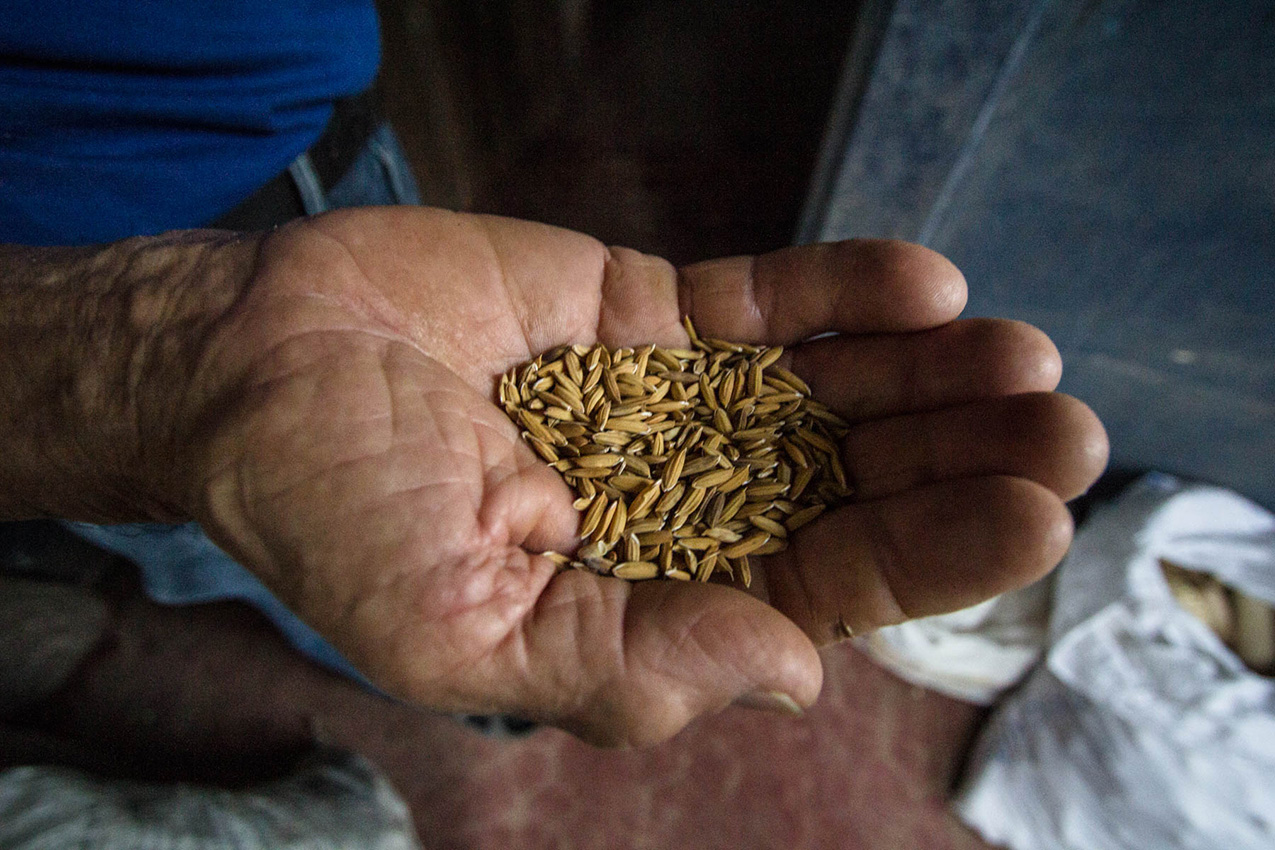 Seed for the Planting Should Not be Milled

Delfin saves seed to enable his subsistence crops that provide for his extended family. While this seventy-year-old man still works steep slopes of greater than 30 degrees, it is more complicated for him to save seed. Farmers wanting to subsist and farm like their ancestors is a threatened way of life. The inability to pursue a livelihood with increased uncertainty from weather is further hampered by being required to purchase new seed yearly from corporations holding patents on plants that form the foundation of our food system.

Title references Käthe Kollwitz’s lithograph, “Seed Corn Should Not Be Ground”; we should ensure that people can save viable seed to plant for the next crop and safeguard biodiversity. 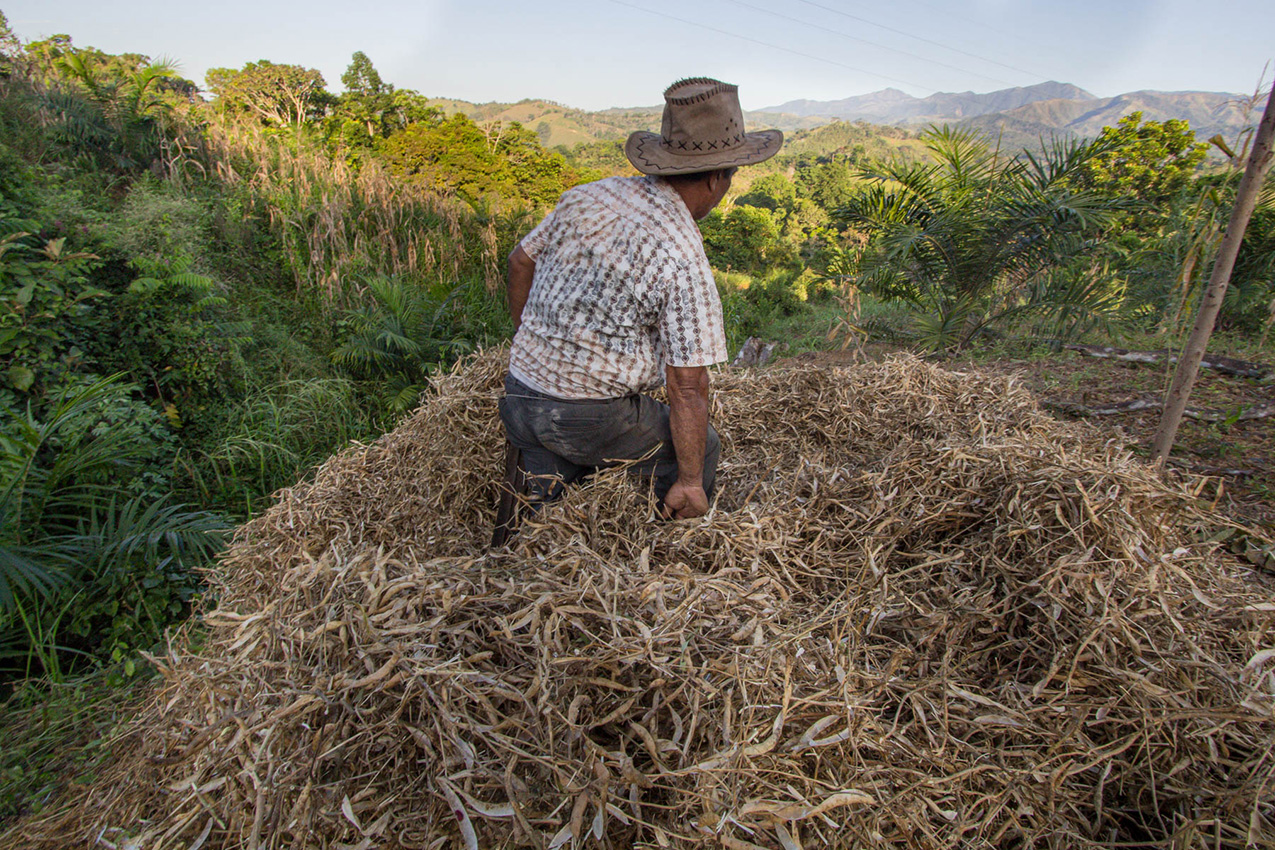 Chepo harvests beans he planted on a steep slope amidst an absentee landlord’s palm oil plantation. Once pulled, tied, and dried in situ he piles bunches on a tarp and threshes them for further sorting and drying. This work is best done in the early morning hours of dawn, before the heat of the day. He sells his beans locally and in offerings made at the “soda,” or open-air restaurant/café run by his daughter. The land with soil freshly exposed from deforestation of native rainforest benefits from the annual bean crop’s nitrogen fixing ability. Palm oil plantations and ranches for livestock grazing are replacing large tracts of native rainforests worldwide. 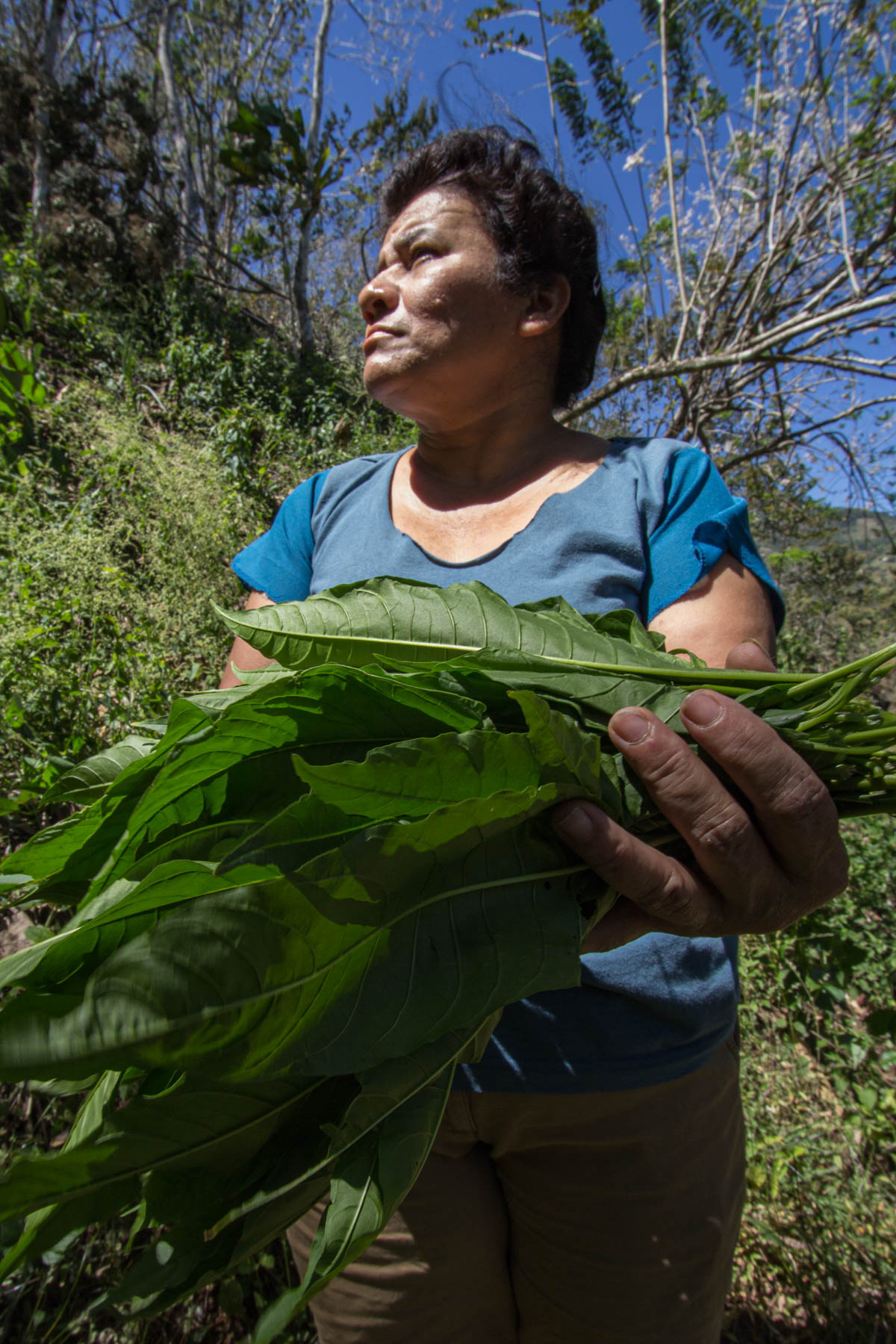 Harvesting a native plant, wild kioro—rich in iron, Mariella offers the long green leaves for dinner. It is used much like kale or spinach. Behind her is the slope of the hillside farm where she and her father also plant and harvest beans, corn, and rice. 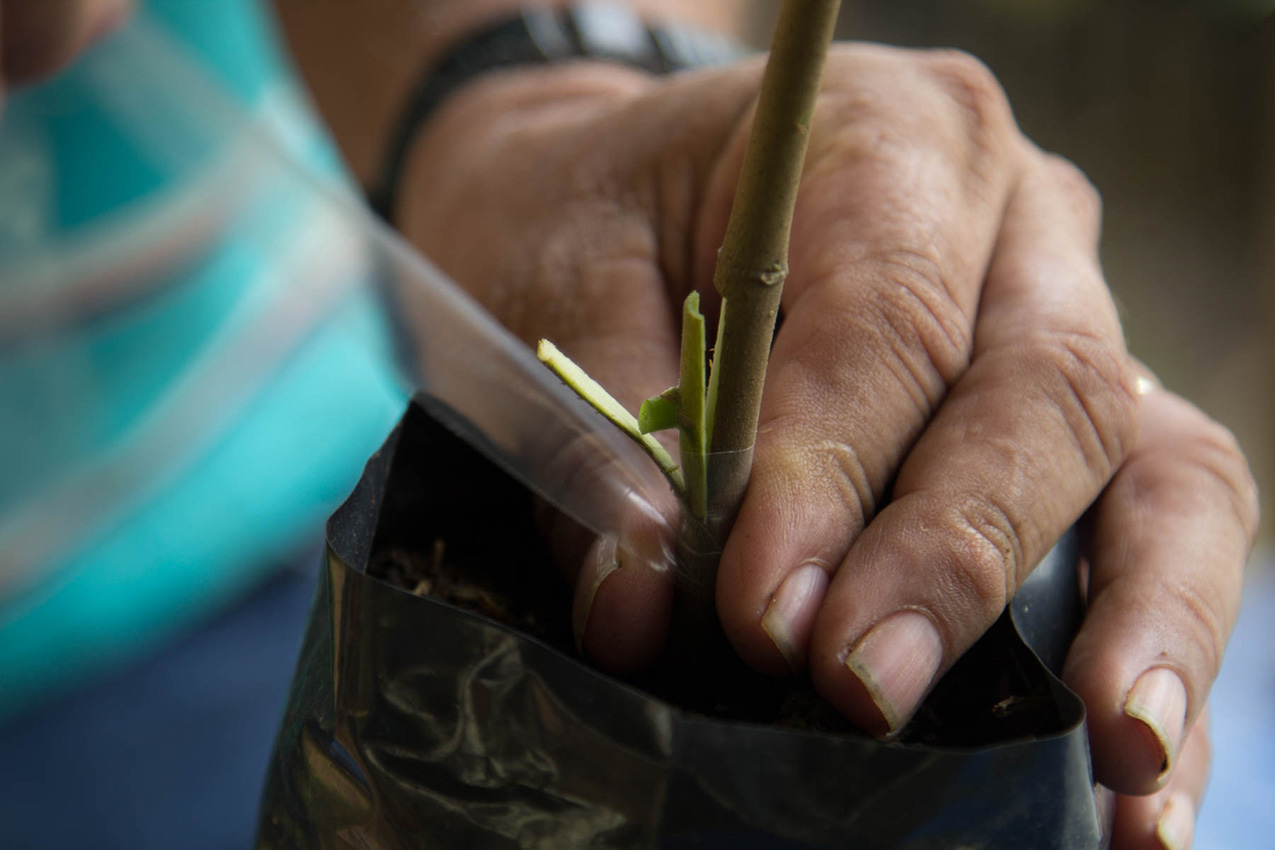 Creating the cacao orchards of tomorrow. With an eye on potential climate variation, deft hands graft varietal buds with desirable traits for chocolate production. Scientists and educators work together at CATIE Institute research center, devoted to increasing agricultural sustainability, conservation of natural resources, and inclusive human well-being in Latin America and the Caribbean. 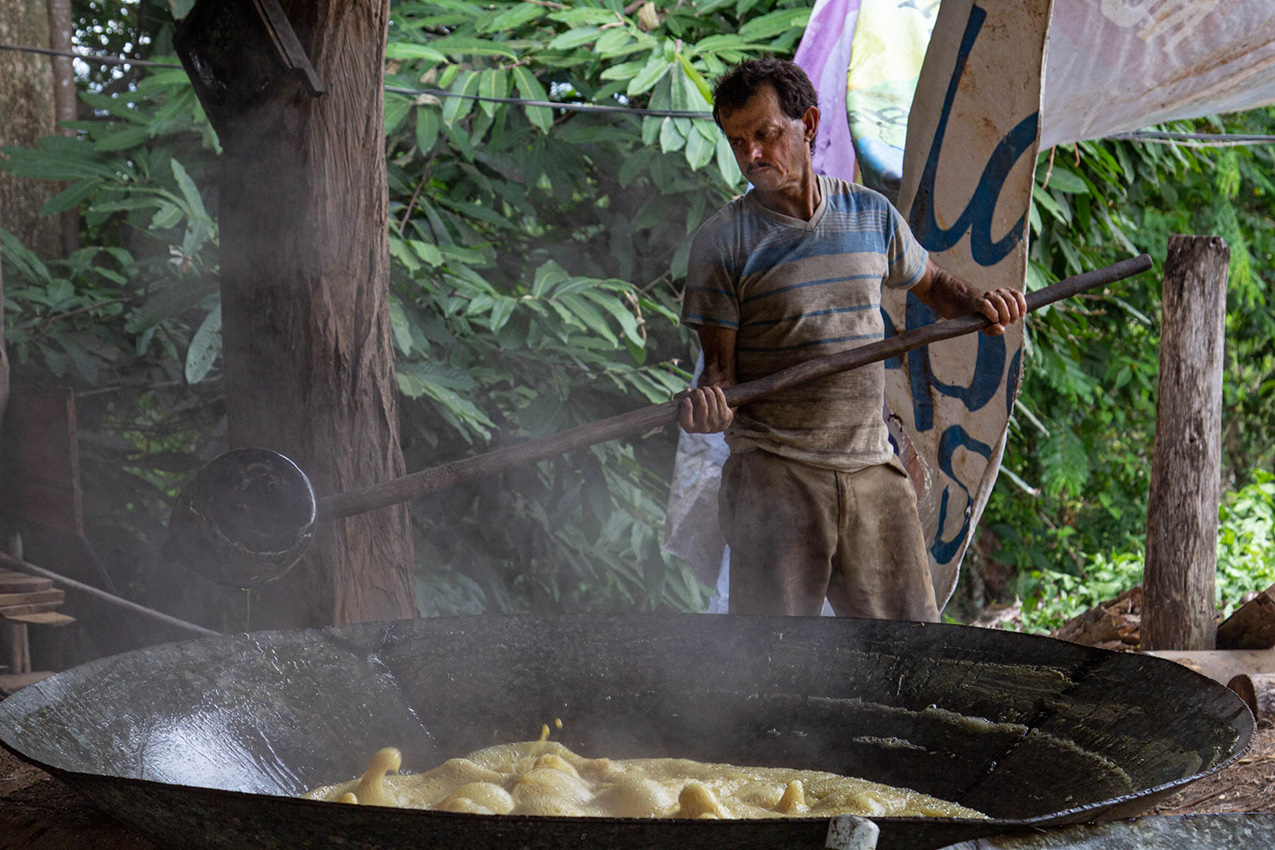 Sweet Steam Rising in the Trapiche

Locally harvested sugar cane is milled using the brawn of oxen to capture fresh and unfiltered sugarcane juice, which is boiled down using the spent cane as fuel to produce tapa dulce or panela. This dark brown sweetener contains policosanols, which may have numerous health benefits, one being lowering cholesterol. Several trapiches in the region fill the local supply for residents. Recently, a corporation in Colombia has attempted to patent the process, despite centuries of production across Latin America.

Gioia Kuss, photographer and installation artist, works in local or international venues. Her projects focus on collaborative efforts to protect earth’s communities and how survival of species depends on protection of natural resources. Her narratives seek to harmonize support for human dignity, and celebrate our planet’s sanctity. Nature’s power and human bonds inspire her imagery. She pursues camaraderie avidly and chooses silver linings. Gioia was a member of the 2018–19 VII Photo Agency Masterclass. She received first place in the IPA Lucie award Editorial Environment category, October 2019; and was first place winner in the People category and honorable mention for Landscape and Nature categories from the 13th Julia Margaret Cameron Awards. She attended residencies at the Carving Studio and Sculpture Center, Marble House Project, and Ninth Wave Global. She studied in Paris France and in Guang Zhou China and was adjunct faculty in the Green Mountain College Art Department.