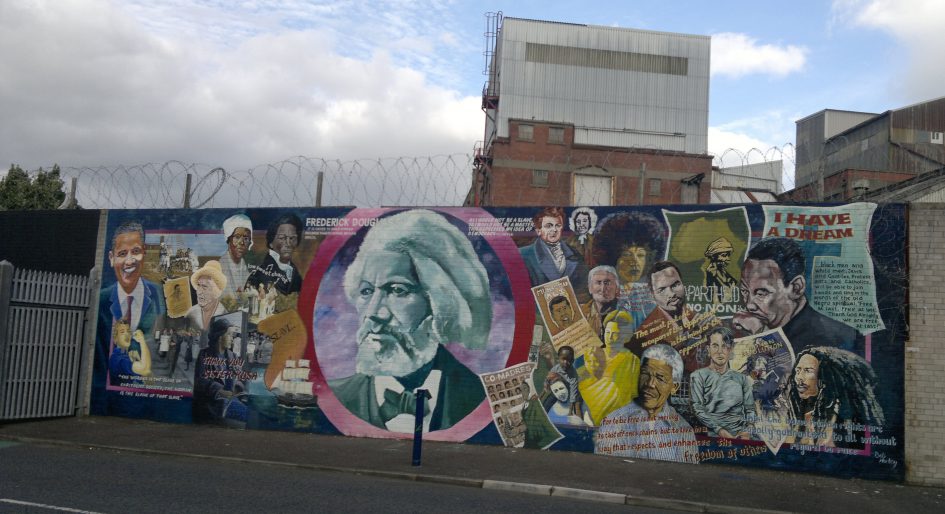 Silhouetted against the setting sun; standing on an outcrop of hexagonal columns at the Giant’s Causeway on the north east of Ireland, Nettie Douglass, the great great granddaughter of Frederick Douglass, breathed deeply the Atlantic air and absorbed the ceaseless rhythms of its pounding waves. Four generations on, she was imagining the thoughts that may have filled the mind of her iconic forebear when he too, as a young man of twenty-seven, stood at this same unspoilt wonder of the Emerald Isle.
Frederick Douglass had, on the advice of friends, sought refuge in Ireland in 1845, following the publication of his controversial anti-slavery memoir The Narrative of Frederick Douglass – An American Slave. It was at the beginning of a two-year tour of Britain and Ireland, before returning to the United States where he would become a colossus in the long and torturous struggle to end American slavery and sow the seeds for the modern Civil Rights Movement.
Ireland welcomed Douglass with an embrace that was to transform his consciousness and leave an indelible mark on his world view. He had come as a single issue campaigner, hoping to garner support for the abolitionist movement back home. When he departed, he left as an internationalist, determined to be the advocate and champion of the downtrodden the world over. 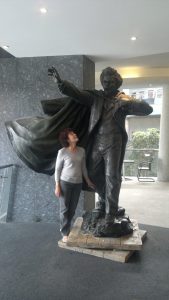 The ‘Liberator’, Daniel O’Connell (1775-1847), welcomed the young Douglass, introducing him to a Dublin audience as ‘The Black O’Connell of the United State’.  It wasn’t so much that Ireland’s elder statesman was conferring on a young fugitive an affectionate moniker to impress his listeners. Rather, O’Connell, then seventy-years-old and in failing health, recognised the qualities in Douglass that could lead to significant achievement. It was O’Connell’s global embrace that deeply moved Douglass. In a letter to the American Abolitionist, William Garrison, on 28 September 1845, Douglass quoted from a speech he heard the Irish Liberator deliver:

I am the advocate of civil and religious liberty, all over the globe, and wherever tyranny exists, I am the foe of the tyrant; wherever oppression shows itself, I am the foe of the oppressor; wherever slavery rears its head, I am the enemy of the system, or the institution, call it by what name you will. I am the friend of liberty in every clime, class and color. My sympathy with distress is not confined within the narrow bounds of my own green island. No—it extends itself to every corner of the earth. My heart walks abroad, and wherever the miserable are to be succoured, or the slave to be set free, there my spirit is at home, and I delight to dwell.’

That was a key moment. The following February, in a letter to Garrison written in Scotland he states:

… though I am more closely connected and identified with one class of outraged, oppressed  enslaved people, I cannot allow myself to be insensible to the wrongs and sufferings of any part of the great family of man. I am not only an American slave, but a man, and as such, am bound to use my powers for the welfare of the whole human brotherhood. 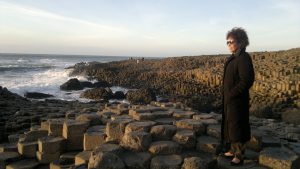 On January 1, 1846, Frederick Douglass wrote what is perhaps his most important letter from Ireland, clearly outlining the impact his four-and-a-half months visit had on him:

I am now about to take leave of the Emerald Isle, for Glasgow, Scotland… I have travelled almost from the hill of “Howth” to the Giant’s Causeway, and from the Giant’s Causeway to Cape Clear… I can truly say, I have spent some of the happiest moments of my life since landing in this country. I seem to have undergone a transformation. I live a new life… the spirit of freedom that seems to animate all with whom I come in contact… contrasted so strongly with my long and bitter experience in the United States, that I look with wonder and amazement on the transition… Instead of the bright blue sky of America, I am covered with the soft grey fog of the Emerald Isle. I breathe, and lo! The chattel becomes a man. I gaze around in vain for one who will question my equal humanity, claim me as his slave, or offer me an insult… Thank heaven for the respite I now enjoy!”

One hundred and sixty seven years later Nettie Douglass had come back to Ireland to walk the ground so revered by her great great grandfather. In Dublin, Belfast, Kilkenny and Kerry she was welcomed with the same warmth and respect that Frederick Douglass had experienced, and I was delighted to have the opportunity to spend time with her and to photograph her visit, especially to the Belfast Peace Line wall mural.
At Derrynane, Co. Kerry, the homestead of Daniel O’Connell she informed a packed audience of O’Connell’s influence on her ancestor. “It’s unlikely”, she said, “that without the influence of Daniel O’Connell, Douglass would have endeavoured to engage so directly in the politics surrounding the American Civil War and emancipation in the 19th Century.”
In the highly politicised environs of west Belfast she found the memory of Frederick Douglass’s Irish sojourn keenly remembered. On the Belfast ‘Peace Line’ she was brought to a wall mural of Frederick Douglass, painted by artists from both the nationalist and unionist traditions, in which a large portrait of Douglass is surrounded by themes and images of the American and international struggle for freedom.

At All Hallows College, Dublin, opened in 1842 with the support of Daniel O’Connell, she was guest of honour at a dinner hosted to celebrate her visit. She had earlier viewed a resin statue of a monument by the Anglo-Irish sculptor, Andrew Edwards, which, when unveiled, will be the first statue in the world depicting Frederick Douglass as a young man, and the first statue in Ireland honouring an African-American.
At the hill of Howth, Dublin, she watched a liner sail past the Baily Lighthouse into Dublin Port following the same shipping laneway that carried her forebear from Liverpool to Dublin in 1845. At the Giant’s Causeway she found herself contemplating the impact Ireland had had on Frederick Douglass the man.
“I have always associated the wind with Frederick Douglass”, she said. “It’s his way of telling me he’s nearby. And I felt his presence there on the Giant’s Causeway at sunset and as the wind roused the mighty ocean and the waves crashed upon the causeway with a roar that seemed to echo the cloak he is wearing in Andrew Edwards magnificent statue…. It was in Ireland my great great grandfather first felt a free man and for that I too will always feel a special affinity with Ireland and immense gratitude towards her people.”

Don Mullan is an author, a humanitarian project developer and media producer. His first book, Eye­wit­ness Bloody Sun­day (1997) is officially recognized as a pri­mary catalyst of the new Bloody Sunday Inquiry which led to an historic apology by British Prime Minister in 2010.
His humanitarian work has included projects and active roles in Brazil, Rwanda, South Africa, Philippines and Haiti. He was awarded the Defender of Human Dignity Award by the International League for Human Rights at the United Nations (2003). Current projects he initiated include The 1914 Christmas Truce Project in Messines, Belgium; the Pelé Little Prince Hospital Pelé Peace Medal project; and he initiated and is co-founder of the Frederick Douglass and Daniel O’Connell Ireland/USA Project.
An interest in photography using his mobile phone led to Don being appointed a Nokia (Ireland) Ambassador (2006-2009) during which time he created the world’s first exhibition by an amateur photographer based entirely on his mobile phone photography.  He has now been selected to create a major photographic exhibition on the ‘European influence of St. Columba’ for the 2013 Derry-Londonderry UK City of Culture events, which he will create with his mobile.
Don recently joined DePaul University, Chicago, as special advisor and guest lecturer to the School of Public Service (2011).

Other works by Don Mullan »