SPIRIT OF THE BURREN

The Burren in Ireland’s county Care is a unique karst or limestone landscape of clints, flat rock-sheet, with fissures between the slabs known as grykes.. 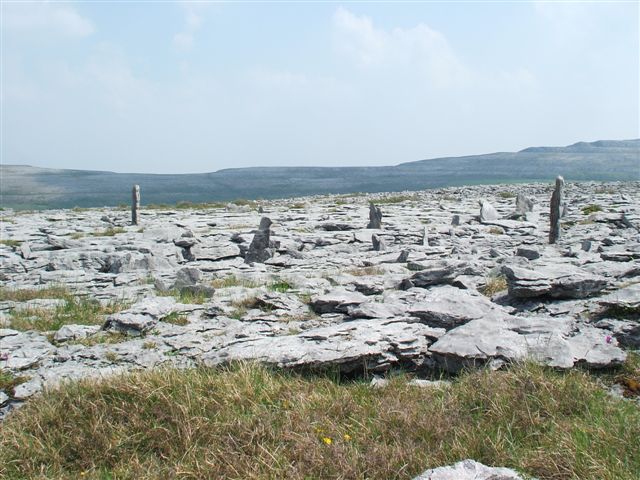 I had paid my usual respects to Colman Mac Duagh in his hermitage under Slieve Carron, dipped my fingers in his sacred well, and was now wandering along under the escarpment, through the hazel scrub, attempting to follow the ‘Path of the Dishes’ of the old legend in which plates of food were magically transported from the table of King Guaire at his dun near Kinvara to the hermit just finishing his 40-day fast.
Colman had found a place that ideally furnished the needs of a hermit – a high escarpment, a spring well, a cave and a thicket. It had retained its remoteness, except for the occasional pilgrim, through twelve centuries, though was now in danger of over-discovery by guided walking groups. On that day I had it all to myself. In fact I had not seen a soul all day since I left my house on the Flaggy Shore.
Yesterday a little group of us had read and partly enacted The Dreaming of the Bones in its proper setting, among the ruined but still graceful arches of Corcomroe Abbey, which the Cistercians had named Sancta Maria de Petra Fertilis – Holy Mary of the Fertile Rock, a gesture no doubt to ‘the flowering desert’. Some of Yeats’s lines were still echoing in my mind: ‘We know the pathways that the sheep tread out/And all the hiding-places of the hills…’.
The Burren in spring – at any time, but especially in spring – is truly magical. To Jan Morris it is ‘a region of ancient magic and infinite strangeness.’ The bare bones of rock open to the sky change colour as the clouds drift over, from white to pink to mauve to violet to silver. As you carefully pick your steps over the clints and grykes you try to avoid carelessly crushing underfoot a cluster of spring gentian or a splash of Bloody Cranesbill, or stoop to try to determine which of the dozens of Burren-happy orchids is growing from that mossy cushion.
Today was a day for solitude.

When Colman retired to his retreat under the cliff he was accompanied by a young cleric, as servant. The Servant’s Grave is marked by a square mound some distance east of the hermitage. It is not easy to distinguish. The approach to it from the south used to be marked by two sentinel stones, standing a little apart. On my previous visit one had fallen. A strong companion managed to stand it in place again. Today I was disappointed to see that both pillars had collapsed or been knocked. As I continued my ramblings I eventually found myself approaching the mound from the opposite direction.
As happens often among these stone pavements, random slabs get wedged upright among the grykes. Amongst them here were two much taller than any others. These appeared to be aligned to the ‘Servant’s Grave’ just visible on the skyline – a mirror reflection of the two fallen pillars on the south side.
Was I being over-fanciful in thinking that a particular wedged stone between them was intended to represent a cowled monkish figure pointing the way?

Earlier, as I traversed a flat area of beautifully polished smooth slabs, a sudden unearthly cry from somewhere behind me stopped me in my tracks. Looking around, I could see no living thing. But no bird could have made that sound. As I hesitantly retraced my steps, my eye caught a slight movement. Approaching the spot, I found sunk deep in one of the grykes and wedged firmly between jutting layers of limestone, lying upside down on his back, was a kid goat. He did not make another sound but his eyes rolled in terror as his legs struggled helplessly above him.
What was I to do? As far as I could tell there wasn’t another soul for miles. I didn’t know how long the creature had been stuck there – a day, a week? How on earth did he get himself into that predicament – play-fighting with other young goats probably, though there wasn’t a sign of any of the wild herd that live among the hills and valleys. How would I know if he was injured, or damaged from his struggles?
Tentatively I knelt beside him and, making soothing noises, reached down to where I could get my hand under his head. My touch convulsed him further. There was going to be no easy way. His horns were just big enough for me to get a grip on. I caught hold of them and pulled hard. There was barely a shift. If I pulled harder I was afraid of damaging him more. But it was clear he was going to die anyway, so I could do no worse. Seizing the horns again I hauled with all my strength, closing my mind to how much I was hurting him or how much damage I might be doing to his neck or his ribs or spine.
There was a slight shift. Hauling again, and twisting from side to side, I managed to gradually ease him upward until suddenly, with one convulsive spasm, he was out. In an instant he had taken off across the rocky pavement, rapidly though slightly crookedly. He was not too damaged.
As I watched him go I felt I had released something of the spirit of the Burren. And perhaps of my own spirit too, for I now felt lightened and more joyful.  I remembered reading somewhere of the ‘Law of Quality’ which states that the more energy one draws from a sacred place or relic, the more it becomes capable of bestowing.

The Burren’s capacity for bestowal reminds me of the Bó Gaibhneach, the cow of Glasgivnagh which gave an endless supply of milk.

It is an infinite source. 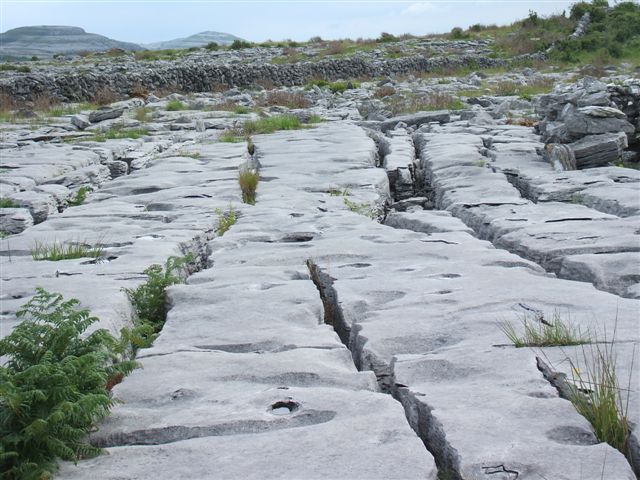 Elizabeth Healy was born in Cork, Ireland. She worked in Dublin with Bord Failte – the Irish Tourist Board and was renown for her editorship of the journal, Ireland of the Welcomes for many years. Her books include The Book of the Liffey, A Literary Tour of Ireland and In Search of Ireland’s Holy Wells (all Wolfhound Press).  Held a painting exhibition in Sligo in 2011, themed on the poetry of W. B. Yeats. Has a deep love of Ireland, of nature and the outdoors. Was one of Ireland’s best rock-climbers in her time, and has climbed in Britain and the Alps, and trekked in the Himalaya. Elizabeth swims every day, year-round. Retired for many years, she now lives in Dublin and does occasional free-lance writing.