Graphic designer, artist working in copperplate colour etchings, sculptor and award winning book & magazine designer and illustrator, Dublin based Jan de Fouw’s Babel: Vista on Confusion is a concept sculpture, of meditations on language and its communication from early origins through print to the present www digital era, typeset and printed on tablets of clay and ceramic panels. This is the text of his meditations (with occasional slight variation from the original panels) on Babel with close up details of some clay bricks, ceramic panels and additional watercolours. Editor.

The TOWER OF BABEL 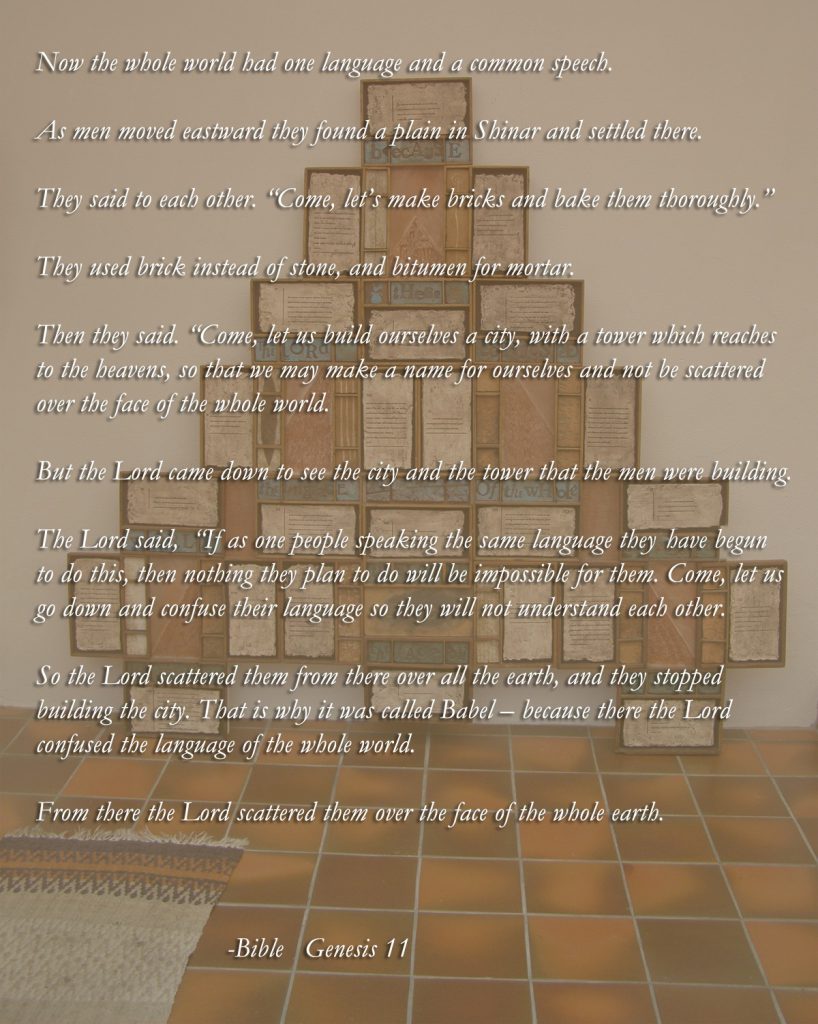 As a child I was told that Paradise was somewhere, in a green land between two rivers, far away – just outside the reach of floods and where Nature was loved and respected in all its ways, each and every day. 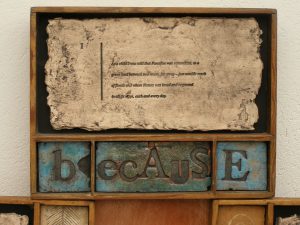 Imagine – ANYWHERE. A flat and fertile plain between rivers. Horizon shimmering in the early morning sun. 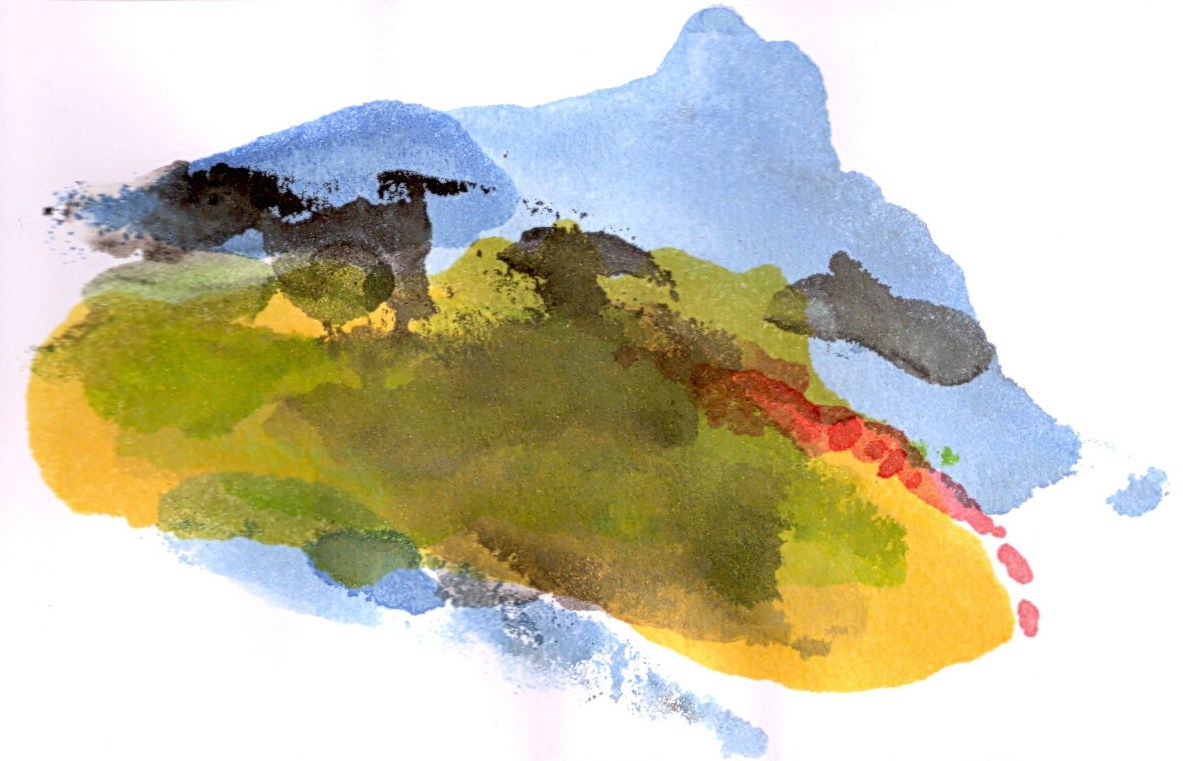 Devotion of people in the knowledge that water, cool and sweet with heat of the seasons produces riches.

Ur-men playing their part. Ambition in pursuit of happiness.

… and my eyes were enchanted by gentle manners and the warm honey-sweet taste of fruits of field and forest gathered lovingly by many hands without undue haste.

Now to have a concept – imagine – Pantheon. Votive design of grand proportion. Striving to reach the apex of possibilities, something never tried before. The summit of endeavour – a journey to the seventh heaven of the gods. Supreme dedication by the Lord of Kings and architect, Marduk, to the power of Man. Together. People working in unison, total harmony…

… and I walked around in admiration of their monuments to the sun and the moon and the movements of the stars in the Zodiac, observed and traced in curving golden lines, shadows at noon. 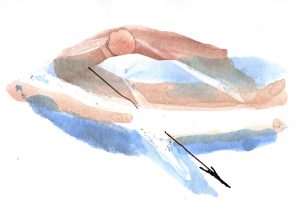 The longbow pulled back and royal arrow shot to the greatest distance possible, straight, with godlike strength to mark the corners. Imagine. The space around large enough to parade a thousand men, women and children of the nation. Aligned, happy in the knowledge that they can meet the challenge to reach the heavens above. Seven stages – the magic number – for plan and elevation. Squared.

… and I saw people wanting to work together at creating stepping-stones to reach the realm where gods (as they knew them) resided – and where they would feel nearer to their infinite grace. 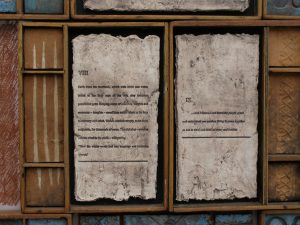 Earth from the riverbank, mixed with straw and water, baked in the fiery rays of the sun, clay becomes paradisical gold. Keeping count of numbers, weights and measures – imagine – cuneiform script. Ideas to be kept in memory and mind. Tablets simply marked, to be kept, enigmatic, for thousands of years. The alphabet – evasive like the wind in the reeds – whispering.

“Now the whole world had one language and common speech.”

… and I listened and heard the people speak and understand one another, living in peace together as one in word and deed, as sister and brother. 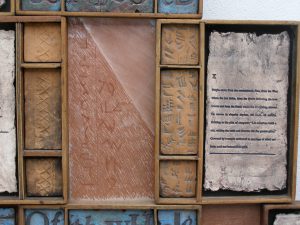 People came from the mountainous East, from the West where the sun hides, from the North following the cool breeze and from the South where the life-giving circular sea moves in singular rhythm. All races, all colours, listening to the plan of conquest: “Let ourselves build a city, uniting the earth and heavens for the greater glory.” Crowned by a temple dedicated to marriage of mind and body, soul and indomitable spirit.

… and I saw what they were doing and marvelled at their love, their brilliant minds which made it possible for all to agree (like bees in a hive), to build for humankind. 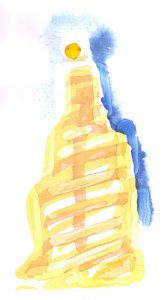 Bodily they built a ziggurat, centre of their city. Stairways to the residence of gods or sublime concept of creativity within the realm of Man in his environment. Proud achievement of finding an answer to the question of living together and in the knowledge of, finally, death reaching out to each individual on the highest step of the ladder.

Imagine – wings to be carried even higher, towards light eternal.

... and I believed that this was good and what the Lord of all Kings wanted, with breath for all creatures living, young and old, and never to be haunted by death.

But then the Lord said: “If as one people speaking the same language they have begun to 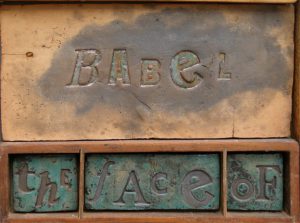 do this, then nothing they plan to do will be impossible for them.” This confused all who had worked hard for the greater glory of God, as they knew Him. “They stopped building their city, Babel, and scattered over all the earth.”

Imagine (it is written), “There the Lord confused the language of the whole world.”

… and I grew confused when the omnipotent  Father of Man showed his fear for his own creation and destroyed the loving and living together (in his name) of a whole nation.

What followed – after the pride of the people had been destroyed: the fall from grace took away their self esteem and common purpose, their centre of community, their dedication to compose a hymn to life in their work. New gods had to be found, new beliefs.

Their language, now fragmented into many different sounds, expressions, confused the meaning of common words. Their alphabet became a rattle-bag of symbols. Their minds inward closing boxes.

…. and I was afraid when their clay tablets with writings were dispersed. Building blocks of their memory. Buried in the sands, lost in the dust, worn down by weather, became (from now on) history.

Feelings of fellowship, race, colour, creed, rights of property, ownership of land and ideas of life and death became confused. Misunderstanding and suspicion reigned. Wars started under false pretexts with claims of divine rights and blessings. Greed took over. Painted symbols replaced words of persuasion. Colours and manners of dress became verdicts of life and death. Winged bulls transformed into a golden calf and money became the new credo. Hallelujah!

… and I could hear the braying of donkeys and the monotonous beh-beh of sheep. A deafening noise rising from the snake pit of gold numbers in the clinical void of the deep. 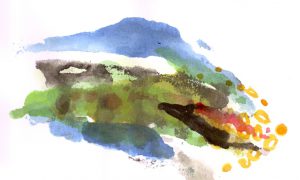 New gods were invented, guarding the interest in fields of profit – Medusa; mindset with heads named Iseq, Nikkei, Nasdaq and others with polluting halitosis destroying earth, air and oceans.

Looking away from blinding glare (diversionary tactics), concentrating efforts of conquest on space beyond our grasp. Yet. Time will tell if pointed probes of science and digital commands will cut new clothes for the emperor and hush the crowd’s confusion. The murmured message … words printed on paper, film, tape or even golden disc with built-in obsolescence. 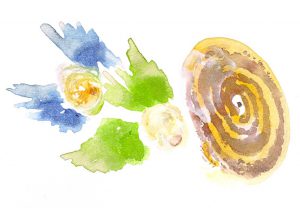 … and I would seek the silence of museums, treasure houses of imprints of people long gone. Remains of wise rulers and kings, signs embedded in baked earth. Sacred evidence of life buried in a glass case.

Now we surf the net and try to read with bloodshot eyes information waves of the alphabet. Iridescent. Shaped like poisoned mushrooms and nails in the coffins of Gutenberg, Bembo, Caslon, Garamond and even Gill who would grind his chisel on the gravestone of typographic confusion. Babelonic proportion. Digital. Caught in the mesh of Internet, the pull irresistible, holding, jaws agape, eyes staring with incomprehension. Drowning is possible. Alone.

“Scattered over all the earth.”

… and I was caught (before I knew) in www 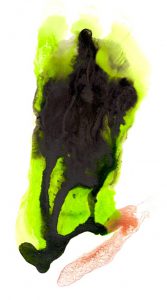 Born in The Hague, Netherlands, Jan de Fouw was trained as a graphic designer at the Royal College of Art, The Hague. He settled in Dublin in 1951 working as a free-lance designer with a Bauhaus background. He was instrumental in setting up Dublin’s Black Church Print Studio in 1982. His printed works are mainly copperplate colour etchings of medium format, which reflect man’s relationship with nature and the elements.
Poetry sometimes accompanies the imagery, as in the book Amergin (Wolfhound Press, 2000). More recently he has been experimenting with bronze sculpture focusing on similar concerns. From 1952 to 1996 he was design director of the bi-monthly magazine Ireland of the Welcomes. He is a three-time award winner from the International Regional Magazine Association, USA. He was awarded Honoris Causa Associateship of the National College of Art and Design, Dublin in 1991. He has lectured at the College of Marketing and Design, Dublin and the Institute of Art, Design and Technology, Dun Laoghaire. He has participated in countless group shows both nationally and internationally, including exhibitions in Milwaukee, Los Angeles, Boston, Toronto, Sydney, Beijing, Hang Zhou and here in Dublin. He is a regular exhibitor at the RHA Annual Exhibition, Dublin. (Babel: Vista on Confustion, text, illustration and sculpture, Jan de Fouw Dublin 2001, 2012. Ceramics, Fiona Coffey.)