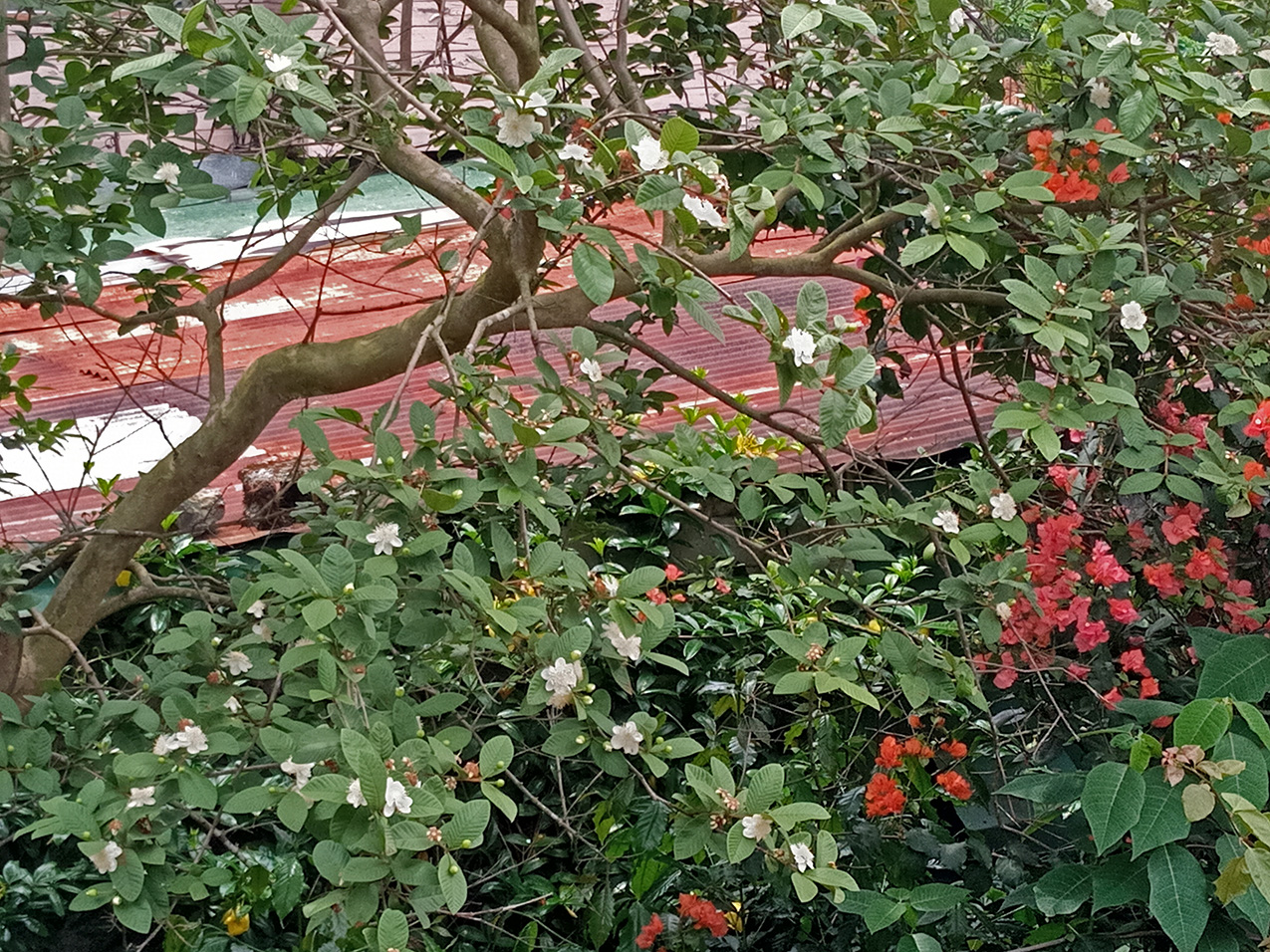 I never knew that guava trees could blossom, not until I spotted a tiny white flower nestled amongst the thick, hardy leaves of our guava tree on a balmy April afternoon. The tree in our yard had once been barren, given up for dead before our country was placed on lockdown, but as the streets emptied and the air cleared, green nodules emerged from the tree’s dry branches, signalling a second life. These nodules turned out to be the beginnings of bright green leaves, lengthening and unfurling as our doctors and nurses fought for their lives in isolation wards, having fallen ill from the virus while caring for the sick. This unexpected greening felt like a gift as our streets fell silent, held in death’s quiet vise, but I never expected the small green buds accompanying these new leaves to contain delicate, white petals. Our tree had never flowered throughout its lifetime, not since my father, who had passed away more than two years before, had patiently watered it when it was just a sapling, bearing witness to its miraculous flourishing after it had shed its first leaves, intimating a premature death. Like deck cards expertly fanned, the blossom’s white petals arranged themselves around a crown of starry white anthers, and I jokingly called it a little girl to a friend in San Francisco, who repeatedly gushed at its image on the other side of the world. “This makes me tremble inside,” I remember him saying, and I took this to be a good thing: for every trembling, it seemed, there was also release, a joyous bursting forth.

The next day, there were a few more, some unfurling in pairs, some emerging alone through the dense thicket of leaves. They beamed at me, like little white stars, whenever I sat in our balcony in the mornings, reading books I never had the time or patience for until this lockdown brought my life to a standstill. During the first few weeks, it was Katherine Mansfield, then it was Eudora Welty—before the pandemic, I found them too ponderous and demanding of my time, but with time slowing, I began to find solace in the patient cadences of their prose. Like these two women, our guava tree had taken its sweet time before unleashing upon us this unexpected gift. Pointing them out to my mother, I called them ‘little girls’: wearing skirtfuls of petals and crowned with starry white anthers, they were little princesses emerging from my father’s guava tree to cheer us up as the pandemic wore on with no end in sight. The name appealed to my mother, who started looking out for them in the morning, stepping onto our balcony as the sun slid across our yard, catching quick glimpses at our tree from the kitchen window as we ate breakfast. Like little girls, we’d erupt in excited titters whenever we spotted a new girl, her petals perfectly arranged around her starry little crown.

Perfect flowers have both male and female characteristics, and perhaps we were misgendering them as we called them little girls, and yet we found strange comfort in anthropomorphizing them, as though, in our isolation, our new companions allowed us a brief and fleeting chance to be children again. In the afternoon, we’d see white petals scattered on our roof or on the ground, and we’d look up to see some of our little girls skirtless as they held onto their crowns. I found myself reassuring my mother, who constantly worried that this was the last of the little girls, that more were on their way, pointing at the buds breaking open, at the girls about to burst forth.

May arrived with its afternoon thunderstorms, and with it my own unease as I watched our little girls expose themselves to nature’s unkind and indifferent wrath. Anxiety gripped me as the skies darkened, and true enough, the thunderstorms would come, beating down on our rooftops, refusing to spare the little girls. Despite the entreaties my mother and I raised to the sky to be gentle on them, the rain would scatter their petals all over our driveway, sparing only their soaking crowns, mere remnants of their morning splendour. Near the end of each downpour, my mother and I would emerge onto the balcony, halving an orange between ourselves, mourning the little girls whose petals lay scattered around the guava tree while noticing, to our surprise, more buds bursting open, white petals patiently pushing outwards to meet the clearing skies.

I dreamt that our little girls’ blossoming had been hastened to short, quick explosions, in which they turned a sickly shade of green before shrivelling away. I remember asking them to stop, which only seemed to speed their withering, before I noticed the guava tree’s shrinking as it returned to the dry earth.

Hoping my dream wasn’t prophetic, I checked our tree the next day to see if its blossoming had finally come to an end. More little girls had emerged, their blossoming too patient to betray a slow and steady withering. Bees hovered from crown to crown, sometimes alone, sometimes in pairs, making me wonder if they were the ones responsible for the sweet, woody aroma wafting towards me as I stood on our balcony. More buds with white tips reassured me of impending arrivals, and quietly I thanked the bees and the rain that fed the tree’s roots.

My mother and I wondered if the guava tree had blossomed when my father was still around, and whether we were simply too busy to notice it when it did. “But your father took notice of these things,” my mother said, as another cluster of blossoms bobbed up and down on their branches. “He was attuned to these small things, even when I wasn’t.” I think of the years I spent overseas, away from my father, too far from him to be attuned to how his heart was slowly giving out even as it continued to give him life, how it would explode one day without warning as southerly winds howled outside my Wellington apartment. I still remember how I forced myself to keep working on a novel he believed in, the day before I received the news, even as I sensed, without being told, that the earth beneath my feet was giving way.

I also think about how he kept watch on this guava sapling when I was in high school, watering it even when it appeared to be on the brink of death. Could he sense that its death was still a long way off, that it would flourish and explode in blossoms long after he was gone? Maybe this is also his gift to us, a bouquet of little girls for his daughter and wife, a heart divulging its gifts long after a man’s death.

Monica Macansantos was a James A. Michener Fellow in Writing at the University of Texas at Austin, where she earned her MFA in Fiction and Poetry. She also holds a PhD in Creative Writing from the Victoria University of Wellington in New Zealand. Her work has appeared or is forthcoming in failbetter, The Masters Review, Anomaly, Lunch Ticket, Vol.1 Brooklyn, The Pantograph Punch, and Oyster River Pages, among other places. Her nonfiction has also been named Notable in The Best American Essays 2016. She has been awarded artists’ fellowships at Hedgebrook, the Kimmel Harding Nelson Center for the Arts, the I-Park Foundation, Storyknife Writers Retreat, and Moriumius.

Other works by Monica Macansantos »