The moral arc of the universe is long, but it bends toward justice.

This wisdom spoken by Dr. Martin Luther King has guided me in the assembling of this issue, but the phrase did not originate with him; King adapted it from “Justice and the Conscience”, a sermon given by Theodore Parker in 1853, the abolitionist-minister of Concord, Massachusetts.  A conspirator in the Underground Railroad with Emerson, Thoreau, Bronson Alcott, and others in the community, and one of the financial backers of John Brown’s raid at Harper’s Ferry, Parker wrote his sermons with a loaded pistol at his desk to protect the runaway slaves in his care.

I do not pretend to understand the moral universe; the arc is a long one, my eye reaches but little ways; I cannot calculate the curve and complete the figure by the experience of sight; I can divine it by conscience.  And from what I see I am sure it bends towards justice.

To do justice for this edition I could not limit it to a fifty-year retrospective without examining the legacy of the civil rights movement, and, like Parker, attempt to divine the more perfect union we aspire to.  The opening and closing chapters—“Legacy” and “Children = Hope” (another moral axiom) speak to this. 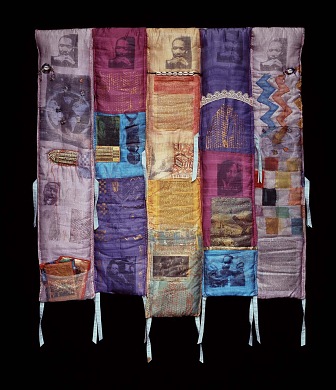 Chapter II, “The Struggle” reflects individual and collective actions that inspired and were inspired by the civil rights movement, and Chapter IV, “Future Past” deals with the blowback and reaction often experienced when hard-won rights are achieved.  “Who Killed McDuffie?” about a black man in Florida beaten to death by police in 1979, and “A Boy Killed” a poem about the murder of Trayvon Martin in Florida over thirty years later, are sobering reminders.

Historian George Katsiaficas’s essay on the Black Panther Party’s Revolutionary People’s Constitutional Convention of 1970 in Chapter III “Future Perfect” is the centerpiece of the issue, a keystone, if you will, in our arc of time that bears witness to a shining moment when all the progressive forces came together and hammered out a new constitution, in Philadelphia, September 5-7, 1970.

In my view, no organization has been so marginalized, maligned, and erased from our recent collective memory as the Black Panther Party.  The inclusion of this essay hopes to restore and clarify their achievements, and their place in our history.

I am deeply honored to include L’Merchie Frazier’s artwork.  Her stunning “Quilted Chronicles” and her narratives and poetry that accompany them are a tapestry of history—past, present, and future— of the ongoing struggle for civil rights.  This is the premier showing of them as an online gallery, and as intra-textual composition with verbal artistry.

I would like to thank Michael McDermott for wholeheartedly supporting the theme of this issue. His editing of the Rust Belt issue of About Place, particularly his use of Diego Rivera’s Detroit Murals, inspired me to do the same with L’Merchie Frazier’s artwork.

A special thanks to graphic artist Sarah Fritz.  Her creative assembling and interplay of artwork and text enriched both, and made this issue shine beyond my own imagining.

During the final days of this issue coming to birth we lost two monumental voices in the struggle for civil rights: Amiri Baraka and Pete Seeger.  Their life’s work give testimony to the power of art to effect positive change for all humanity.  When Mr. Baraka passed on January 9th, Michael McDermott, co-founder of the Black Earth Institute, suggested we dedicate the issue to him.  I asked Askia Touré, one of the founding architects of the Black Arts Movement, to write a tribute to Amiri, and contribute a poem, which he says was Amiri’s favorite of his work.   L’Merchie Frazier also collaborated with Amiri Baraka on his theatre productions, and added a tribute as well.

A few weeks later, on January 27, Pete Seeger died.  He had been singing for nearly a century.  So let us give Pete the last song—a song he learned in the old folk tradition from Doris Plenn, who had it from her North Carolina family.

How Can I Keep from Singing?

My life flows on in endless song
Above earth’s lamentations,
I hear the real, though far-off hymn
That hails a new creation.

Through all the tumult and the strife
I hear its music ringing,
It sounds an echo in my soul.
How can I keep from singing?

While though the tempest loudly roars,
I hear the truth, it liveth.
And though the darkness ’round me close,
Songs in the night it giveth.

No storm can shake my inmost calm,
While to that rock I’m clinging.
Since love is lord of heaven and earth
How can I keep from singing?

When tyrants tremble sick with fear
And hear their death knell ringing,
When friends rejoice both far and near
How can I keep from singing?

In prison cell and dungeon vile
Our thoughts to them are winging,
When friends by shame are undefiled
How can I keep from singing?

Richard Cambridge’s work has appeared in The Paterson Literary Review, Nantucket Journal, Asheville Poetry Review, and other publications. He is the author of a collection of poetry, Pulsa— A Book of Books (Hanover Press), The Cigarette Papers— A Memoir of Addiction (Fern Hill Records) from which he developed a play directed by Patrick Trettenero, and One Shot News—Poetry of Conscience (Earthshine Productions.)

His poetry-theater collaborations include Where the Red Road Runs, a Native American perspective of the European settlement of the Americas; Embargo, portraying the devastating effects of the U.S. economic blockade of Cuba; and Presente, giving voice to political prisoners and prisoners of conscience in the U.S.

He is a recipient of The Allen Ginsberg Poetry Prize, and a finalist for a residency at the Fine Arts Work Shop in Provincetown, MA. He was a member of the 1992 Boston Champion Slam Team, and won the Masters Slam at the 1997 National Poetry Slam. In 2003 he received the Cambridge Peace & Justice Award for the contribution of his arts and activism.

He is a Fellow Emeritus at the Black Earth Institute, a think tank that encourages awareness of the arts as a means of promoting a progressive, inclusively spiritual, and environmentally aware society.

He is curator of a monthly Poets’ Theatre series in Somerville’s Arts at the Armory.

Other works by Richard Cambridge »