Save Me from my Amnesia

My life work is one work. The images in the medium of fiber, beads, metals, poetry or performance are threads of memory, reclaimed from the icons that trigger recognition, salvation, redemption. This journey is ‘Save me from my amnesia.’

L’Merchie Frazier is a visual and performance artist /educator /consultant, a native of Jacksonville, Florida now based in Boston. A mother of two sons and one daughter, L’Merchie has been active in the New England community for over twenty years. As a visual artist she is known for her highly skilled hand crafted beaded jewelry, fiber and metal sculptures, and mixed media installations and quilt series, the “Quilted Chronicles”. 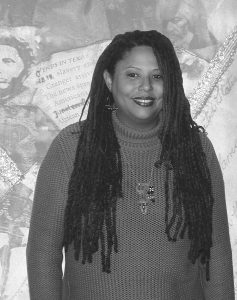 Currently she is Director of Education and Interpretation at the Museum of African-American History, Boston / Nantucket, and is a resident artist of Northeastern University’s African American Master Artist in Residency Program, (AAMARP). L’Merchie is a member of the Women of Color Quilters Network.

L’Merchie was awarded the Francis X. Merritt/Mary B. Bishop Grant and is a recipient of the Lila Wallace, Reader’s Digest, Arts International artist-in-residence fellowship in Brazil; “Best of Boston” poetry award 1999. She is a recipient of an artist residency in Tainan, Taiwan; commissioned muralist for the New England Aquarium; commissioned kinetic sculptor for Boston ParkArts 2000-2002; City of Boston Public Art Award; and the New England Foundation for the Arts, Visible Republic Public Art commission in holography. Recently, she founded “Pearls for Peace” jewelry in silver and pearls to create a philanthropic women’s fund. She serves on the Board of Paige Academy and is an artist/consultant for Southend Technology Center, and MIT FabLab. She received Sigma Gamma Rho Sorority, Celebration of Education Service Award, in Boston, MA, November 2011. Recently she was awarded the 2012 “Community Catalyst” by Madison Park Development Corporation. Filmed in an interview for PBS Africans in America documentary, Many Rivers to Cross, interstitial, October 2013.

L’Merchie’s work has appeared in several publications, including Journey of Hope: Quilts Inspired by President Barack Obama; and Spirits of the Cloth, by Carolyn Mazloomi; A History of Art in Africa, by Monica Visona; In the Spirit of Martin, Sorin and Shannon; Threads of Faith, Mazloomi and Pongracz; Fiberarts magazine, the International Review of African American Art, Art New England, the Encyclopedia of Black American Artists and Textural Rhythms by Carolyn Mazloomi, and 500 Beaded Objects by Lark Publishers. She was featured artist in a three-part cable television series, About the Arts, and has appeared on CityLine, Urban Update, PBS, other media programs and featured in the Museum of Fine Arts: evens Lecture: series by Edmund Barry Gaither.

She is represented in numerous private collections and the permanent collection of the University of Vermont, the American Museum of Art and Design, New York, and the Smithsonian Institute, Washington, DC. Exhibition sites, internationally and nationally include the Museum of Afro-American History Boston; the Museum of the National Center of Afro-American Artists, Boston; New England Quilt Museum; Museu Lasar Segall, Brazil; Ain Ping Harbor, Tainan, Taiwan; the American Craft Museum, New York; the Renwick Gallery of the Smithsonian Institute, Washington, DC. and the permanent collection of the White House.