Having been exposed to Imamu Amiri Baraka in his books of poetry, his lectures and his activism, I finally had the opportunity to meet and work directly with Amiri as a result of a production at the Museum of African American History of his political satire, musical performance piece, Amadou:  Slaughter in Harlem, featuring opera star, baritone, Kevin Maynor.  The controversial poetic opera, based on the life and death of Amadou Diallo, the young victim of police violence, premiered in Boston at the Museum, significantly, on October 5, 2001, one month after the bombing of the World Trade Center in New York.  Linked to my position at the Museum, as Director of Education, was the fortunate responsibility to assist in the production.  While talking with Amiri,  he discovered that I was an artist.  He took my contact information.   Little did I know he had a project already in mind. 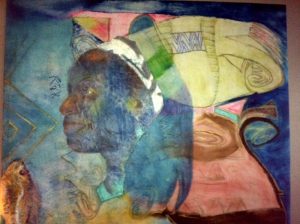 He called me a month later and invited me to his home, in New Jersey, to join the team of people planning another poetic opera, Nat Turner, by composer, Michael Raphael.  I was invited to create a set for the opera that went well beyond my expectations.  Of course I was honored and humbled by the invitation.  Reviewing my approved set plan, in true Amiri style, he requested that during the production he wanted Nat Turner’s envisioned hieroglyphics to fall from the set into the audience.  I could not believe it—animation and interaction?  Only when I saw the feather-like, floating symbols fall on the shoulders of the audience did I feel this magic moment.  Quite evident in that moment was Amiri ‘s unique ability to dream the impossible and take you with him on that journey.  So the stage set, without bells and whistle resources, transformed the space and my artistic path.  Amiri in his own way brought you to life at your best.  He was a fearless champion at making the invisible visible.