Issues » Voices of the Human Spirit » Section 3: Because we need, love and care for our world » Ann Fisher-Wirth

“A place is a story, and stories are geography, and empathy is first of all an act of imagination, a storyteller’s art, and then a way of traveling from here to there.” – Rebecca Solnit

Mississippi: A Collaborative Project
You stand in Tree
Between Two Worlds/The Soul Floats
He Comes To Your Door

Mississippi, where I have lived for the past twenty-five years, suffers from severe environmental degradation that cannot be separated from its history of poverty and racial oppression. Yet the state also possesses great natural beauty and a rich and complex culture, one interwoven from the many voices that have made up its identity. Mississippi, the collaborative project I have undertaken with the acclaimed Mississippi photographer Maude Schuyler Clay, explores both this degradation and this beauty.

The part of Mississippi where my husband and I live—Oxford, 70 miles south of Memphis, home of the University of Mississippi—has changed enormously since we moved here. After it was named one of the country’s best arts communities and best retirement communities, the town’s population nearly doubled. The university has likewise grown. Twenty-five years ago, a furniture store, a shoe repair store, a hardware store, and an auto parts store mingled with other businesses around Courthouse Square. They’re all gone, replaced by boutiques, bars, and restaurants. Twenty-five years ago, Jackson Avenue, leading away from the Square to Highway 6, was a funky two-lane road with overhanging old-growth trees. Five lanes now, it’s a strip, with fast food joints and a WalMart, “landscaped” with the occasional crape myrtle. To expand our local airport for small-plane traffic on football weekends, a wetland was drained. Houses have been torn down, replaced by football condos. On what was forest or farmland, apartment complexes and housing developments have sprung up for miles in every direction. Residential prices have soared—and as a result, many less affluent people have had to leave. This is the new South—increasingly, much like anywhere else. It seems to me and to many others that as we have gained in prosperity we have lost in soul.

Get out of town, though, and the voices are still here. They haunt the land.

Though I have lived in Oxford since 1988, I am not from here, for if you’re not born in the South, you’re never from the South. Consequently, though I’ve often written poems about the weather, I’ve hesitated to write about the people. Maude Schuyler Clay is from the South. Born in Greenwood, she went to school at Ole Miss and later in Memphis; after working in New York, she returned in 1987 to live in the Delta. I have admired her work for years, and from time to time we have talked about doing a collaborative project together. Recently, she started sending me .pdfs of photographs. With one exception, they do not depict people, but rather, land; vines; water; clouds; dilapidated bridges and buildings; shabby, beautiful houses. They depict the spirit of place. Living with her images, listening to her images, has let the Mississippi voices speak through me, in some odd way I don’t quite understand.

Of the poems included here, “You stand in Tree   vrksasana,” is the first poem I wrote for my part in the collaborative project. I teach yoga and for a long time I have wanted to write poems about yoga. Maude’s photograph of the tree reflected in water evokes for me all sorts of doublings and yokings (for “yoga” comes from the Sanskrit yuj, which means “yoke” or “union”)—the self with its reflection, seen with unseen, body with spirit—and evokes, too, the calm and perfect balance that I never actually feel while teetering on one foot. I love the quietness of this photograph, the tree alone among the reflected grasses, the darkly forested hill and tawny violet sky.

The first poem came quickly. Then I got stuck, and realized that a series of poems about yoga was a bad idea. One day I mentioned to Maude how much I liked her photograph of a silvery boat in greenish water, and she told me that the boat belonged to a friend who had just died, who would often go out and just drift on the water. That gave me the second poem, “Between two worlds / the soul floats,” which was influenced by Buddhism, in which I have long been interested.

And the third poem included here, “He comes to your door ”—? Well, who would live in a cave in an embankment? Someone fastidious, I decided—someone gangly, shy, used to manual labor, close to animals. There are traces in this character of a man who stocked shelves here in Oxford at the old Jitney Jungle; traces of the men who come to our door sometimes, asking for work; traces of crazy, God-touched Ivar in Cather’s O Pioneers! He’s someone who doesn’t have money but has what he needs in the earth. He’s one of my favorites in this sequence. In him, the spirit is radiant.

With this poem, the sequence took off in a whole new direction, for it is the first in which a character spoke through me. By now, altogether, there are twenty-five poems, which I have come to understand as explorations of voice in its Mississippi plenitude and variety. Recently on Facebook, someone snarkily commented that though we hear people say things like might could and aks, “That’s not English.” I completely disagree. I honor the voices, no matter whose they are, both white and African American. I love the rich orality of Mississippi culture, and have tried to express it in lines like “The heron he come from afar / like the messenger bird,” “We was walking home from prom / when he pulls out this ring,” “I do not like snake / he be mean,” or—from a different social class—“my husband called me Goldilocks / said I make everything golden.” To write these poems, I listen—not only to human voices but to the photographs. Out of silence, they emerge.

In his poem “Morning” William Carlos Williams writes about wandering through the ragged edges of Rutherford, New Jersey:

to find what
coming? In God’s name! Washed out, worn
out, scavengered and rescavengered—

Spirit of place rise from these ashes
repeating secretly an obscure refrain:

This is my house and here I live.

Like Williams, I am concerned with “spirit of place.” Though I was not born in Mississippi, it has become my home, and I think of the projectMississippi in this regard.

You stand in Tree

You stand in Tree, vrksasana,
as the quiet self blossoms

downward into the waters

beautiful dancer
all around the rose-light flows

the grasses flourish upward
beyond, the open lake

and the hills unfold their darkness 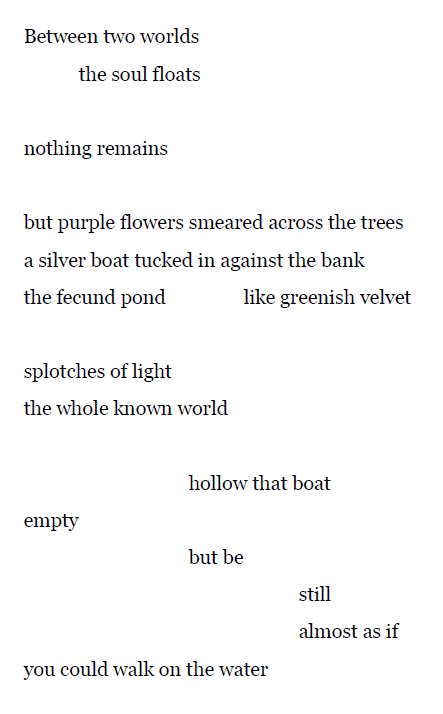 He Comes To Your Door 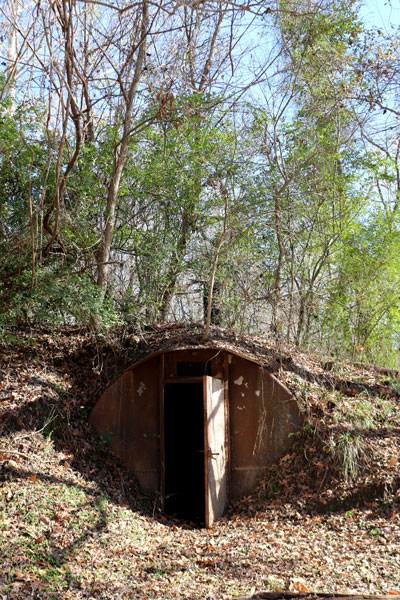 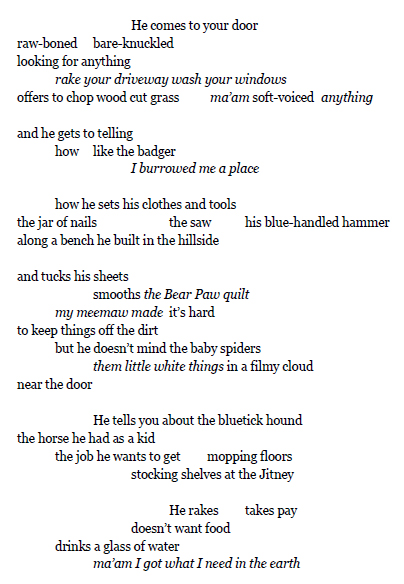 Ann Fisher-Wirth’s fourth book of poems, Dream Cabinet, was published by Wings Press in 2012. Her other books of poems are Carta Marina, Blue Window, and Five Terraces. She coedited The Ecopoetry Anthology, published by Trinity University Press early in 2013. She has also published the chapbooks Slide Shows, Walking Wu-Wei’s Scroll, and The Trinket Poems. Her poems appear widely and have received numerous awards, including a Malahat Review Long Poem Prize, the Rita Dove Poetry Award, the Mississippi Institute of Arts and Letters Poetry Award, two Mississippi Arts Commission fellowships, and thirteen Pushcart nominations including a Special Mention. She teaches at the University of Mississippi, where she also directs the minor in Environmental Studies. And she teaches yoga at Southern Star Yoga Studio in Oxford, MS.

Maude Schuyler Clay was born in Greenwood, Mississippi. After attending the University of Mississippi and the Memphis Academy of Arts, she assisted the photographer William Eggleston. She moved to New York City and worked at LIGHT Gallery and then as a photography editor and photographer for Esquire, Fortune, Vanity Fair, and other publications. When she returned to live in the Mississippi Delta in 1987, she continued her color portrait work, for which she received the Mississippi Arts and Letters award for photography in 1988, and in 1992. In 1993, she began a series of black and white photographs of the Delta landscape. She received the Mississippi Art Commission’s Individual Artist Grant in 1998. The University Press of Mississippi published her widely recognized monograph DELTA LAND in 1999, which received the Mississippi Arts and Letters Award in 2000. She was the Photography Editor of the literary magazine The Oxford American from 1998-2002. Her work is in the collections of The Museum of Modern Art, The Museum of Fine Arts, Houston, and The National Museum for Women in the Arts, among others.

Other works by Ann Fisher-Wirth »