Issues » Voices of the Human Spirit » Section 3: Because we need, love and care for our world » Susanna Lang 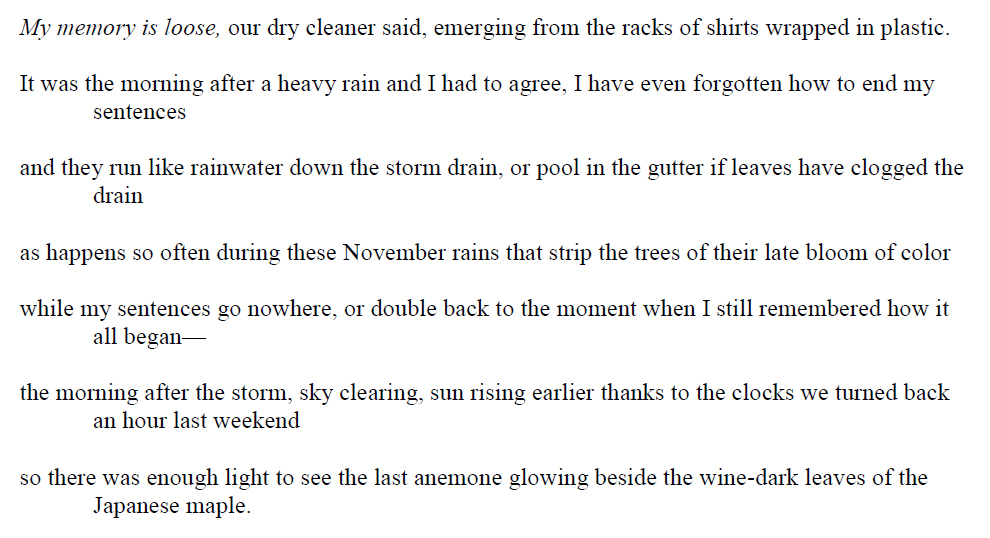 This summer as my son grows tall, the heat
is personal—like the summer I waited
for him to be born, his blood
burning inside of mine.

It’s not just the corn that never silked or tasseled,
not just the farmers who mow the stalks for hay.
The grass by our river is sere and white,
the river sluggish.

The house is dark with heat, the curtains drawn, the circuits shorted.
I touch the place where my husband’s mother’s ring should be
but it’s not there. The silver so old
it grew brittle, it broke.

The place where my son waited inside me is no longer there; is there
but empty; is there but burns.

Once we would have left when the land went dry, when earthworms
bored deeper than we could dig. Now city workers
run their wheel saw outside our door, crack
open the pavement:

the curbs and gutters smell of burning concrete, ring with the fall
of heavy things. It’s not just my body gone dry.

What rain there is comes and goes in a temper, run-off
that does not feed the roots. And only the bindweed
opens its many greedy mouths, only
the wild blue chicory.

Susanna Lang’s most recent collection of poems, Tracing the Lines, was published in 2013 by the Brick Road Poetry Press. Her first collection, Even Now, was published in 2008 by The Backwaters Press, and a chapbook, Two by Two, was released in October 2011 from Finishing Line Press. She has published original poems and essays, and translations from the French, in such journals as Little Star, New Letters, The Sow’s Ear Poetry Review, The Green Mountains Review, The Baltimore Review, Kalliope, Southern Poetry Review, World Literature Today, Chicago Review, New Directions, and Jubilat. Book publications include translations of Words in Stone and The Origin of Language, both by Yves Bonnefoy. She lives in Chicago, where she teaches in the Chicago Public Schools. www.susannalang.com

Other works by Susanna Lang »