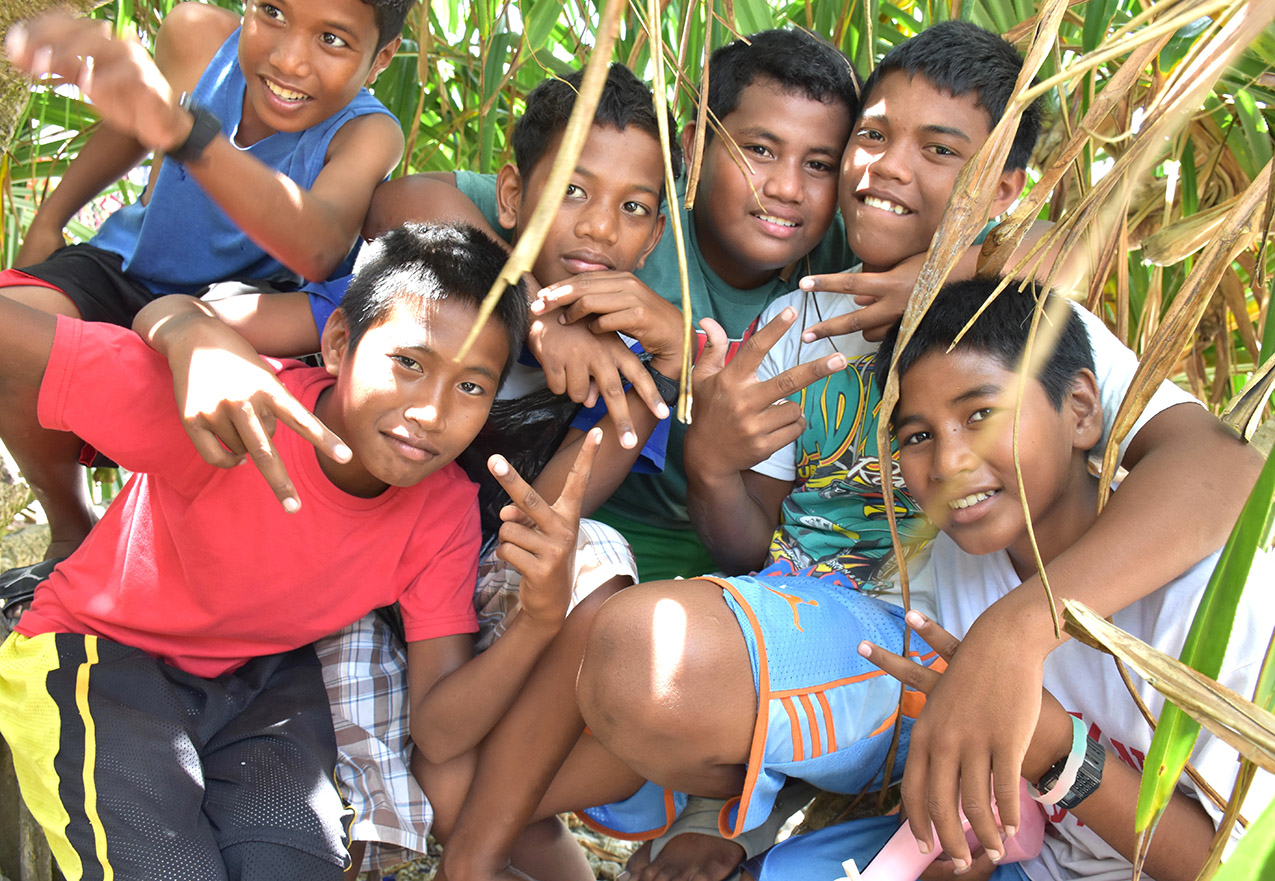 The Marshall Islands, near where the equator crosses the International Date Line in the Pacific, were first settled by Micronesians in the second millennium BCE. Magellan touched down in the 1520s, and the Spanish claimed them in 1592, and sold them to the Germans in 1885. The Japanese took them in WWI and the US in WWII. Almost immediately, the US forced the evacuation of Kwajalein Island, on Kwajalein Atoll, where it maintains a military base with a staff of 1,000, and it started performing A-bomb tests, destroying the Bikini Atoll and evacuating its entire population of 167 persons. The Bikini Town Hall is now on Majuro, the capital, 400 miles to the south.

These boys were around the corner from the Town Hall.

I heard them singing before I saw them, which was unsurprising — walking down the street in Majuro it was very common to hear singing wafting out a window or back yard — or a church — almost always in harmony, always in perfect pitch. It is rare to see a group of Marshallese where there isn’t at least one ukulele, and six-part harmony is common. These kids were inside a large bush, getting some shade from the intense sun at midday, and they sang beautifully, spontaneously doing many-part harmony. You can see the kid on the right’s pink uke; the kid in the blue shorts did a beat box and the one behind him freestyled over the song in a reggaeton mode. Their life will be tough, with little work waiting for them, and poverty and alcoholism rampant. Many of the islands in the Pacific are blessed with wild fruits and fertile soil, and although there isn’t much money, there is plenty to eat. On Majuro, there is only a fraction of the land needed to feed everyone. Life is tight and hard. For now, these boys sing sweetly and live with magic. The adults sing, too. 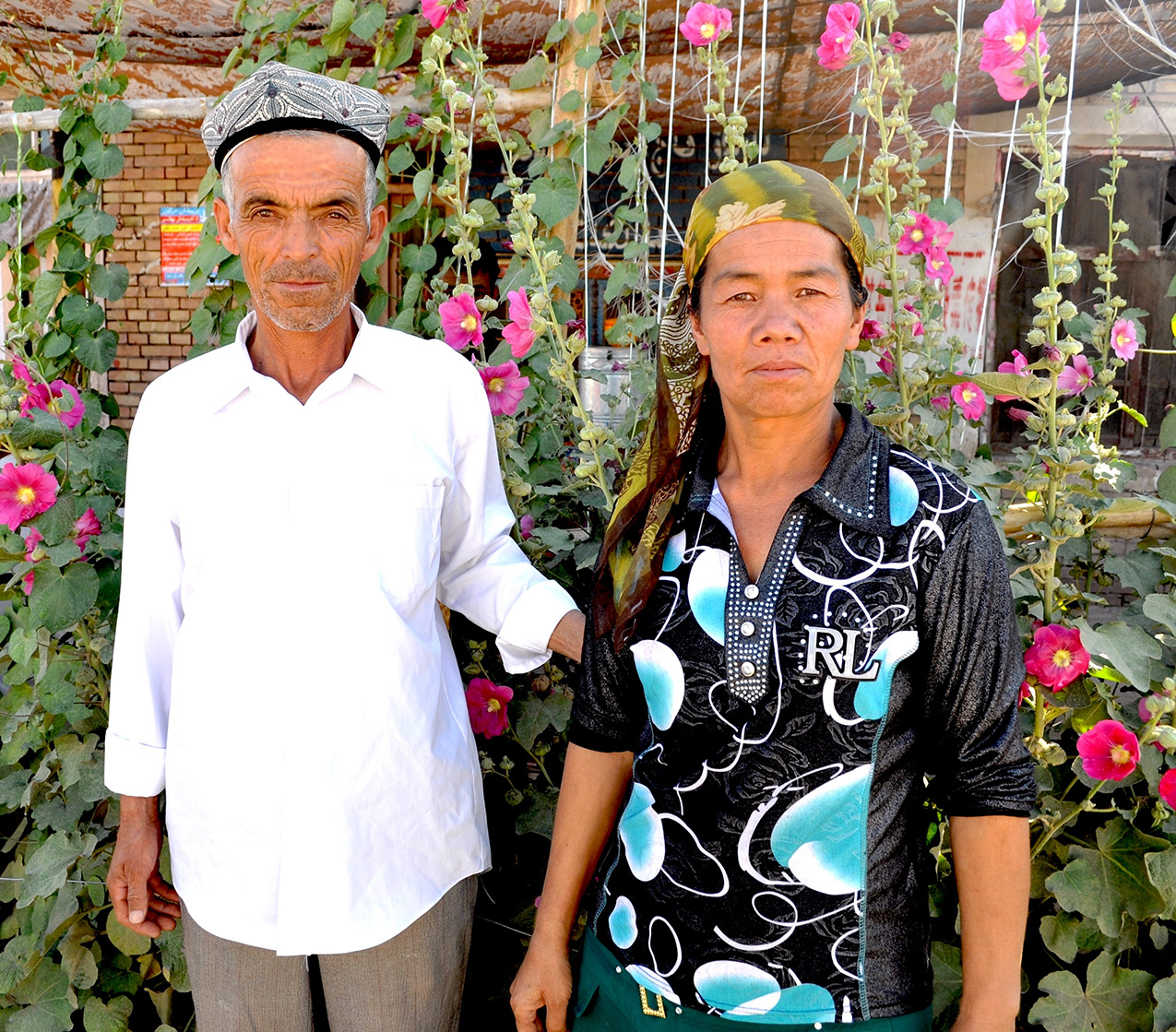 The area now known as Xinjiang, in the far northwest of China, was originally home to Tocharian, Yuezhi, and Xiongnu peoples, during the first millennium BCE, and later was controlled, in whole or in part by the Khotan, Liang, Qin, and other dynasties. In the seventh century it was conquered by the Tibetan Empire, and in the eighth and ninth centuries was the center of an enormous Uighur Empire. By the fourteenth century, after being controlled by different Khans, it was taken by the Mongol Empire, the largest contiguous empire in history, and ruled by a Mongol people known as the Dzungar. The Uighur revolted against Dzungar rule, and when the Chinese Qing Dynasty invaded in 1750, the Uighur fought with them. The Dungan revolt of 1755 met a genocidal response, with Uighurs again working alongside Manchu generals to massacre over a half million Dzungar Mongols, some eighty per cent of the population by 1757. In the 1911 revolution that created the Republic of China, the area was ruled by a Hui minority from Gansu, and regular rebellions of the Muslim majority ensued. Short-lived republics were declared — the First East Turkestan Republic in 1933, the Second East Turkestan Republic in 1944 — and in 1949, what is called by Chinese historians the Peaceful Liberation of Xinjiang made it a province, and then an Autonomous Region of the People’s Republic of China. The PRC sponsored the mass migration of Han Chinese to the region, and any expressions of Uighur identity were suppressed. Many fled across the border into Russia, Kazakhstan, and Tajikistan in the 1960s, and sporadic guerilla resistance has occurred since. The Uighur have attacked Chinese rule throughout the 1980s and 1990s, and in 2009, within days of when this picture was taken, the Urumqi riots broke out, followed by wider unrest, the 2010 Aksu bombing, the 2011 Hotan attack, the 2012 hijacking, and many others. In 2017, so many arrests in relation to these uprisings had been made that internment camps were established, with an estimated two to three million people detained for “re-education.” This is the largest extrajudicial detention since WWII, and the region is the most heavily policed in the world.

This couple tended their garden, and in addition to their modern fashions, like her Ralph Lauren shirt, they maintained traditions, like their flower trellis, his Uighur hat, and her headscarf. I like to think I can see a determination to remain unbowed in both of their expressions.

Near the Syrian border, Jordan 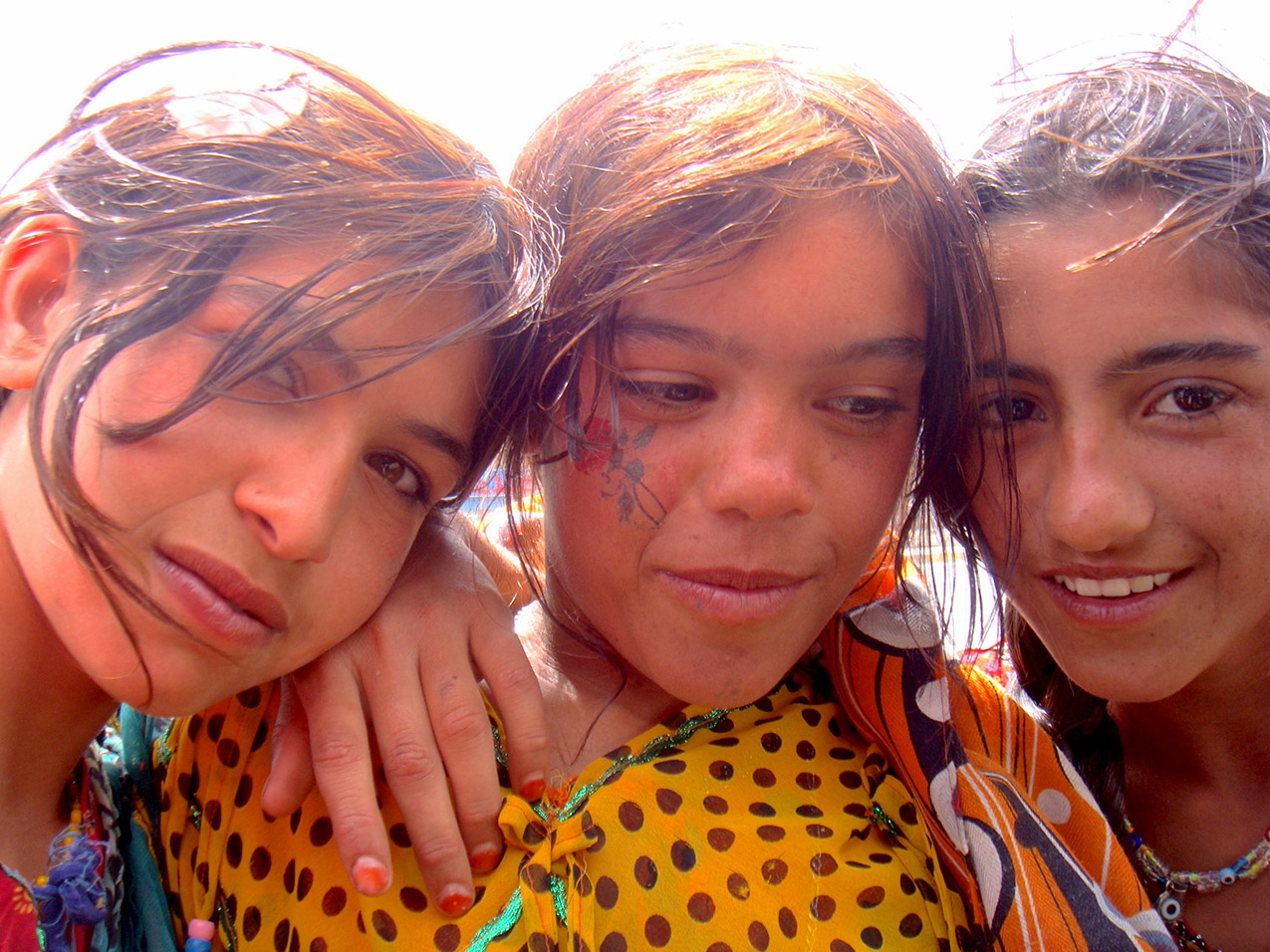 The war in Syria, another of Mr. Putin’s atrocities, has made it the most violent spot on the globe, ranked last on the Global Peace Index, or at least it was until Putin invaded Ukraine. Since the Civil War started in 2011, almost six hundred thousand are dead, and over half the total population has been displaced, with seven and a half million internal refugees, and five million fleeing over the borders.

From 10,000 BCE a series of Neolithic cultures lived in what is now Syria, and around 3500 BCE, one of the oldest known civilizations evolved in Ebla. It was taken by Akkadian Empire in the 23rd century, the Hurrians and Amorites in the 21st, the Babylonians in the 19th, Indo-European Sea Peoples in the 12th, after which the Hittite, Mitanni, Egyptian, and Middle Assyrian Empires all took turns. Various Semitic-speaking peoples arrived, of whom, over a couple centuries, the Arameans took control, then the Phoenicians, and the Neo Assyrians in the 10th century, the Scythians briefly, then the Neo-Babylonians, the Achaemenids., the Macedonians, the Greeks, Judean Hasmoneans, Armenians, the Romans, and the Byzantines. Then the Arabs — first Umayyad dynasty, the Abbasid dynasty, the Egyptian Tulunids, Ikhshidids, and Hamdanids. During the 11th and 12th centuries, parts of Syria were held by European Crusader states until conquered by the Ayyubid dynasty, the Mongols, and the Mamluks. Tamerlane took the area in 1400 and perpetrated genocide. In 1516, the Ottoman Empire took over and remained in power, with very brief interludes, until WWI. During that war, the Ottomans perpetrated the Armenian and Assyrian genocides. As the European powers carved up the Middle East after the war, Syria became part of the British Empire, only to be declared a Hashemite Kingdom, and a year later a French protectorate. After a decade of war, France agreed to Syrian independence in 1936, but the legislature refused to ratify the treaty. In 1946, pressure from the British led to France relinquishing its remaining control. A series of coups and countercoups and revolutions, uprisings and massacres, alliances with Egypt and the USSR, and the Yom Kippur War. The current Civil War began in response to the Arab Spring, and has pitted the Syrian government and its Russian and Iranian patrons against an array of revolutionary groups and factions with Turkish support.

These three girls and the little brother of one of them all live in a cluster of UNHCR tents off the side of a two-lane highway twenty miles or so south of the Syrian border and thirty north of Amman. When I stopped, they were very shy, and would only approach with their scarves covering their heads and faces. Over time, as I showed them pictures of themselves, they relaxed and were willing to engage. We had no language in common, so we didn’t get very far discussing geopolitics, but however traumatic their lives had been so far, they were full of the resilience of youth. Their little brother was less confident and bore his psychic scars in his eyes and body; he was so painfully shy that it seemed cruel to even point the camera at him, so I didn’t. He became slightly less panicked when I made it clear I wouldn’t photograph him, and the girls became more comfortable, too, as I think is clear in this picture. There is no telling when and if they will ever be able to go home. 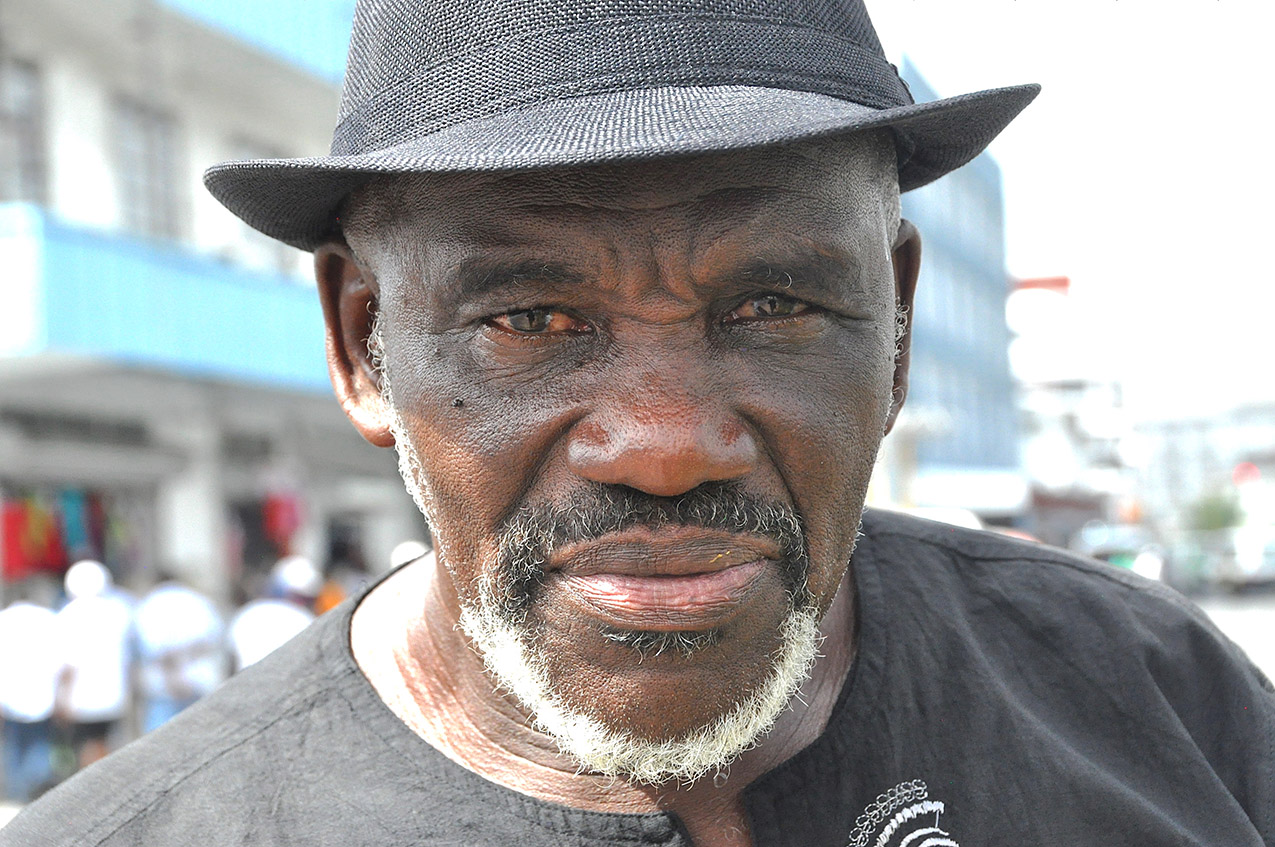 I met this gentleman and his friend in downtown Georgetown, and we had a long talk.

Nine Indigenous tribes live in Guyana, of which the Lokono (Arawak) and Kalina (Carib) have been dominant. The others are Wai Wai, Macushi, Patamona, Wapishana, Pemon, Akawaio, and Warao. An all-star cast of colonialist explorers reported on it. Columbus went by on his third voyage in 1498, Amerigo Vespucci in 1499, Walter Raleigh wrote about it in 1596, and the Dutch colonized coastal areas starting in the 1580s. The British took de facto control in 1796 and official control in 1814. The Western half of the country, known as Guayana Esequiba, was also claimed by Spain and after 1824 by Venezuela, and there have been skirmishes, martial and diplomatic from the beginning. In 1596 the Dutch built a fort at the mouth of the Esequiba River, and the Spanish burned it down that same year. Guyana achieved independence in 1966 and became a republic in 1970. The majority of the population is now the descendants of indentured laborers from India and Africa, with ten percent Indigenous. Almost everyone lives on the coast.

Life is hard, this man told me, for everyone except a few. The Indian-Guyanese, he thought, controlled too much of the economy and dominated the government, and the Chinese were taking over too much business. He had never heard of Jim Jones and didn’t know about the interracial utopian community he was building, deep in the jungle, until the mass suicide. Then he had helped, as a young man, transport body bags to the airport for shipment back to families in the US. “You don’t forget,” he said.

Tom Lutz is the author of American Book Award winner Doing Nothing, New York Times notable books Crying and American Nervousness, 1903, Choice Outstanding Academic Title Cosmopolitan Vistas, the philosophic essay Aimlessness, the travel books The Kindness of Strangers, And the Monkey Learned Nothing, and Drinking Mare’s Milk on the Roof of the World, and the novels Born Slippy and Archipelago. His Portraits: Moments of Intimacy on the Road, from which some of these images are drawn, is out this year. He is the founder of the Los Angeles Review of Books and is now Distinguished Professor and Chair of Creative Writing at UC Riverside.