HUNTING FOR GROWTH IN A SHRINKING CITY

I didn’t so much grow up in Cleveland as I did into Cleveland — like a vine wrapping around a brick. My thoughts and interests became tied to its physicality, to its familiarity, and of course with the familiar comes the nostalgic longing for the way things used to be.

As a kid in our yard behind our house in the city I remember the Labor Day weekends. How the pre-fall summer sat so clear with its temperateness—that sky so great and blue with an expanse holding birds like hands holding peas. The city air shows were that weekend, and we lived near the lake. So each year we had a show in our own backyard. With the mechanical expressions of Blue Angels flying sharp and low, their sounds tailing behind them to give the auditory illusion of torn paper if it was bottled up and amped before being let out to scream. And while beautiful—the precision, this power—I was more than discreetly afraid of the noises. And it was then that I’d look for him, for reassurance: a sign it was okay. And there he’d be on the porch looking up smiling at the force overhead. His face made because of reasons similar to the relief I got by finding him there.

I still live in Cleveland, and that’s the plus side of staying where you grew up: the physical proximity to the memory can serve to give the past a presence. Yet there’s a downside, and it arises from the grounding reality that the past can’t exist intact, and this is particularly true in the Rust Belt.

Sometimes the hurt is enough for me to want to leave and start over. Home, then, becoming merely a host.

Across the smokestacks attached to the still, brick blocks that are no longer conjuring up a burn, across the sidewalks with people in heavy clothes, across the severity of a landscape that has had its face rubbed in it like the tired falling forward, I am only partially separate.

I live as an individual don’t get me wrong. I am a father, a jogger, a writer, and a friend. I like cold domestics. Cook ribs and winter soup. I watch sports and play at being a hard ass probably more than those in my life can appreciate.

To that end I live from where I was birthed. Yet in my living I affect in a small way the surroundings that bore me.

That last point has been clearly played out — how the Rust Belt city has shrank. People get an urge or need to leave. They go. The city becomes still, partially derelict, and nature consumes. And then it gets called dead by those on the Coasts, with more people going to where the aliveness is said to be.

Yes, leaving has become common in America’s industrial heart. It is easy to see why, as life is as real as a stone here. Fewer illusions. And it’s nice to envision an escape — to Charleston with its walkability and beaches; to San Fran with its mist; to NYC with its buzz that can serve to keep the sound of aloneness away.

In fact I left once. I went to Chicago for a spell in my mid-twenties. I went there a year after returning to Cleveland from undergrad at Ohio U. Remaining home after undergrad proved to be too much. Too many reminders and too much partying. Too many dead-end, childhood friends. And so I will always remember leaving Cleveland for my new beginning. Driving across the Skyway Bridge and seeing the City of Broad Shoulders for the first time created a beat in my chest.

I studied psychology there. I hung with gang bangers in Humboldt Park. I partied too much. I did it all because physically leaving didn’t afford me the reprieve from internally needing to escape. In the end, not only was I still away from a time in my life I wanted to get back to, I was away from the place that helped create my life.

Eventually I realized the only chance I had at getting partially whole was to return to the setting where my breaking points occurred.

It has been nearly ten years since I came back home.  A near decade of living with the places that I laughed and cried and screamed in.  Years of living in the places that I still laugh and cry and scream in.  And while I am far from perfect — far from whole — I at least know that what I am looking at is real. The Terminal Tower will always be my skyscraper. Sears will always be the impossibility of some dream no one can reach. 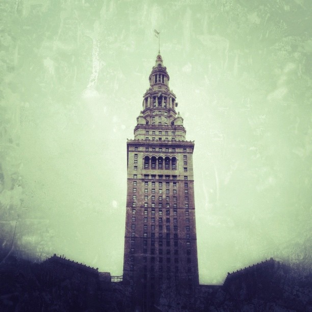 And I remain here, choosing to live with the vacancy and the abandonment and the loss, fighting to see the potential in it instead of just the need to escape.

Here. In Cleveland. The Rust Belt.

Here in the presence of my daughter that I am raising to be a Cleveland girl. But a Cleveland girl that will someday fight her own urge to leave. And regardless if she physically remains, here’s hoping that she will always feel home to be home — and not home as merely a host.

This is an excerpt from a forthcoming book “Rust Belt Chic: The Cleveland Anthology.”

Richey Piiparinen has published numerous short stories and essays. He is a contributor to the Huffington Post and the Urbanophile, as well as a regional blog, Rust Wire, dedicated to a Rust Belt renaissance, and his own blog GreenCityBlueLake:Sustainability in Northeast Ohio. He is a Research Assistant for the Center on Urban Poverty and Community Development in Cleveland, with a M.A. in Clinical Psychology from Roosevelt University in Chicago and M.U.P.D.D from Cleveland State. Richey’s dedication to Northeast Ohio is reflected in past and current work related to: workforce development; community aging; neighborhood re-development, and the socio-emotional effects of the post-industrial landscape.