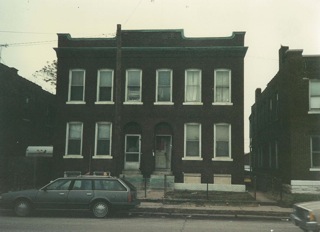 I COME FROM GRANITE CITY

A railroad flat with tall windows that looked out
on Mercer’s Funeral Home, the Busy Bee Bakery across
Grand Avenue where the mother cat slept with her kittens
on the doughnut racks.

From Calvary Cemetery where
everyone from my childhood is buried.
Street cars, Soulard Market, Switzer Licorice,
Mallinkrodt Chemical poisoning the Mississippi.
Wrought iron and riverboats.

From Irish uncles chain smoking Camels,
dancing at the latest wake.
From the braves ones who
sailed here from Liverpool in 1856
with their five children, the youngest
named only Infant Sloss on the ship’s manifest.

A sheriff great-grandfather in
Potosi Missouri shot dead by the bank robber.
From Carlsbad Caverns with stalagmites
and stalactites and I never remember
which juts up and which are hanging.

I come from the Midwest, the Rust Belt.

Sandra Giedeman has been published in various literary journals and was awarded the Mudfish Annual Poetry Prize by Charles Simic. She is a former magazine editor and owner of Upchurch-Brown Booksellers in Laguna Beach, California, where she hosted poetry readings including those of the students of the UC Irvine MFA program. She is a past president of the Orange County Chapter of PEN and member of the CSUF extension writing program advisory board. “I grew up in Granite City, Illinois where I developed my love for reading and language. At 13, I won the National Spelling Bee. I’ve been fortunate to study with Denis Johnson, Nick Flynn, and David St. John.  I was thrilled to read at Shakespeare and Company in Paris with other poets in a group.”