Report from the Future: South Bend, Indiana, in 2035 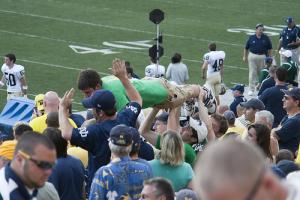 From the Wolf News Information Link

SOUTH BEND, INDIANA (USA) As late as the 2010s, the sight of downtown streets in South Bend thronged with shoppers, office workers and entertainment seekers in the evening would have been shocking. Once upon a time you could shoot a cannon down South Bend’s Main Street at 8 p.m. with little risk of casualties. But the area is now bustling with people day and night, many of whom come not to work or shop but simply to be where the action is. “There’s no other place to be,” says Vandana Van der Kamp, who takes the new fast train from Merrillville, Indiana, at least once a week. “The best bands, the best Filipino food, the most fun— it’s all here.”